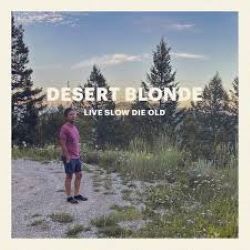 Started initially in the studio in winter 2020 but ultimately finished in the extended quarantine that 2021 has proved to be this fourth EP from Desert Blonde, a.k.a. Zach Hinkle, reflects that fact. Without the ability to tinker with the sound too much or the temptation to embellish, the resulting EP ‘Live Slow Die Old’ is a laid back, minimalist affair. A definition of isolation and restraint if you will.

Engineering and mixing engineer Tommy Cormier provides the majority of the accompaniment that is on offer and affords the songs just a little more depth while never departing from the artist’s stated aim of creating an intimate sound.

With a dry wit and some often very simplistic scanning Hinkle’s songs have an old-time country/folk feel to them. This tactic is employed with mixed success. On ‘It Ain’t Bad (To Be Alone)’ the effect is rather Steve Forbert-esque in a rather up-tempo, jolly feeling song that is, maybe, a song for our times. Aimed at both the introverts among us and those who might be struggling with forced isolation “It ain’t bad to be alone, it ain’t bad be on your own, it ain’t bad to be by yourself, you just got to know when to go home… and get stoned, all night long.”

Now whether the listener finds this approach amusing or tiresome may depend on the mood at the time. But the simplistic rhyming does grate a tad after a while. Closing track ‘DeVille’ gives us ‘summer’ with ‘bummer’ as well as a chorus line of “We can hit the pool, hit the bong, it’s just right there, it won’t take long.” Get the idea?

‘Cold in California’ adds some guest pedal steel and stands head and shoulders above anything else on the six-track EP. The twang of the pedal gives the song a mournful, atmospheric tone and the song writing has a much more mature and reflective feel to it.

This feels like barroom music. An artist doing his stuff with a loyal crowd sharing intimate in-jokes in a beery sing-a-long. The reviewer presents ‘Four Beers Deep’ as evidence. With a murmuring background barroom noise throughout and a boozy lyric it reflects, whether by luck or design, the arena in which this music may best be enjoyed. There is an undoubtedly fun element to Hinkle’s writing which, in pretty miserable times, has to be commended, but the wider appeal of the EP may be limited.