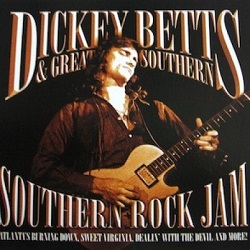 Southern Rock Jam is a compilation of ten tracks, five each from Dickey Betts’ two albums for Arista – Dickey Betts & Great Southern and Atlanta’s Burning Down. These date to Betts’ first time out from the Allman Brothers Band in the late 1970’s, and the music is very much in the vein of his previous band. That’s to say Southern Rock with a touch of the electric blues – with twin lead guitars, one of them a slide. Dickey Betts made the smart long term decision to stick close to the formula and not be side-lined into pop-rock production. It may not have helped so much at the time – Dickey Betts & Great Southern performed reasonably well hitting the number 37 spot in the US charts but Atlanta’s Burning Down only crawled to 157 before stalling. The times, as they so often are, were a-changin’ and Southern Rock was already past its glory days. Taking the long view though there’s plenty of enjoyable moments on this best of selection.

Things start off fine with a squealing slide intro to Out to get me, before taking off on a boogie-blues riff stabbed through with chugging harp. Lyrically there’s no need to look for any great depth – it’s a fairly typical “women done treat me bad” song but it’s done with a fair amount of aplomb. Nothing you can do has a more gutsy guitar feel, but remaining well within the funky-blues. It’s not until California Blues that there’s a real stand-out from the crowd song – there’s a touch of the burnt out rock star as Betts philosophises over the woman who doesn’t love him and that he’s soon to part from “But the closest thing to winning must be losin’ / And now and then it gets so damned confusin’ / But it don’t matter anyway / Tomorrow I’ll be leaving you, LA”. There’s just a bit of John Lee Hooker about the start of Good Time Feeling, but that doesn’t last as the tempo picks up for a Southern Rock take on the bon temps roule vibe. Atlanta’s Burning Down sounds like an escapee from White Mansions – the end of the civil war encapsulated into four minutes, and seen from a Southern perspective. The guitar’s evocative, but the strings are intrusive. All in all then quite a mixed bag of seventies  rock – would doubtless enliven a car trip well enough, but doesn’t achieve the majesty that just demands frequent repeat listening.