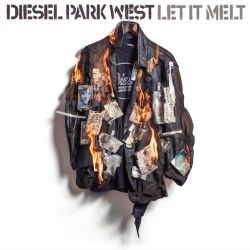 Leicester’s Diesel Park West are one of rock’s great survivors. Their debut album ‘Shakespeare Alabama’ was rightly acclaimed then and now as a minor classic and even gave them a small whiff of commercial success, but apart from that their forty-odd year career has been a familiar tale of record company problems, critical indifference and commercial doldrums, in the face of which they’ve never lost their belief and have kept keeping on keeping on, writing proper songs, making proper rock’n’roll, playing proper foot-stomping shows and emerging into 2019 bloodied but unbowed.

The latest step on their epic journey is this, their ninth studio album, which delivers eleven tracks of rock’n’riffs, harmonies’n’heart. Early on ‘The Golden Mile’ positively races along but once you get to ‘Living In The UK’ things go up a level. It’s an old school anthem that both chronicles our current dire straits and issues a clarion call to sort it out and when it’s followed by the driving ‘Bombs Away’ and the bluesy swagger of ‘You Got The Whole Thing Wrong’ hearts race, feet move and good times roll.

Things slip a little by the time of the final two tracks, ‘Across the Land’ and the slightly elegiac ‘Incredible Things’ but in the main if you like your rock’n’roll loud and louche, sans irony but with heart and soul then this is the album for you.

Proper rock’n’roll from one of rock’s great survivors