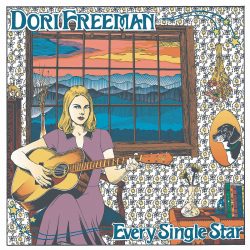 Since she rose to prominence with her excellent self-titled debut album in 2016, Dori Freeman has been on a roll and with the release of ‘Every Single Star’ that momentum shows no sign of abating.  With Teddy Thompson still at the helm on production duty, the duo has yet again combined forces to serve up another musical treat.

If you compare Freeman’s earlier work, which focused on the heartbreak borne of the personal experience of being a single mother in small-town America with the changed perspective of being a happily married mother, then it’s easy to understand the clear change in mood and outlook on ‘Every Single Star’.

Now married to drummer Nick Falk, her latest album concentrates on her positive marital relationship as well as her love for her daughter and the pain and sorrow of previous releases is replaced by a series of highly personal love songs.

This change in direction, though, is still something she is clearly wrestling with and she wonders how she’ll be perceived now that she’s writing songs as a contented mother, and not as a jilted lover. “People don’t really talk about motherhood in the music industry.  Musicians that are also moms and have to juggle touring and being at home and spending enough time with your child; that’s something that’s really hard for me to find balance in.”

The backstory of how she came to work with Thompson is worth repeating. In late 2014 Freeman, somewhat impulsively, sent a Facebook message to Thompson (whom she didn’t know) and he was so captivated with her wonderfully emotive delivery that he agreed to work with her and through Kickstarter funding her debut album was released. Fast forward to 2019 and the pair are still producing great music and with the whole album being recorded in just 5 days at Figure 8 Studios in Brooklyn, it’s clear the pair are perfectly in sync with one another.

Freeman has stated that she had been listening to a lot of Linda Ronstadt and Emmylou Harris as she came to record ‘Every Single Star’ and nowhere is that more obvious than on ‘All I Ever Wanted’ where she could easily be mistaken for Ronstadt. That’s not to say that Dori Freeman is just a Ronstadt clone, far from it. Her influences are more derived from her Appalachian roots and she has also cited Peggy Lee and Rufus Wainwright as significant musical influences.

The album sets a high standard right from the outset with the single ‘How I Feel’ and the level of quality rarely drops with ‘You Lie There’, ‘Darlin Boy’ and ‘2 Step’ – where she duets with Teddy Thompson – being particular highlights on an immensely enjoyable album. Dori Freeman, has a great voice, an eye for the human emotional condition and creates some hugely enjoyable music and as with her previous work,  ‘Every Single Star’ is well worth a listen.