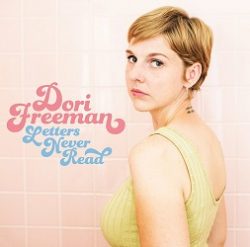 If you’re looking for a vocal that’s as clear as a mountain stream then Dori Freeman has the vocal you’re chasing. On Letters Never Read she defines a modern form of Appalachian country – there’s no affectation here but there’s a lot of variety. Her back story is worth
recounting again – growing up in the Appalachian city of Galax (population 7,000) in a traditional music family she rebelled against these constraints by falling for the wildly modern sounds of Teddy Thompson going so far as to dropping him an email accompanied by a sample of her singing. In a movie worthy twist Teddy Thompson was so impressed that he produced and sang harmony on her 2016 eponymous album. Letters Never Read takes this tale a little further, with Thompson once more producing and, on album opener Make You My Own, generously getting his dad a session fee to add some rather tasty and instantly recognisable guitar on what is the very epitome of an uncluttered anglo-american folk-country song which sends out waves of warm feelings to an object of adoration. This is no small love – “I would weather the wind and the rain / I would shoulder your trouble and pain / I would give you the blood from my veins / If I could make you my own” – but the delivery is so matter of fact as to ensure that there’s no sense of vainglorious hyperbole.

There’s some more Thompson later on with a cover of I Want to see the Bright Lights Tonight, given a slightly underground sixties feel with muted organ and vocals and electric guitar added by Canadian Psychedelic-Americana duo Kacy and Clayton. At the other extremes of arrangement are the marching band feel of Jim Reeves’ Yonder Comes a Sucker which is just Dori singing lightly over a range of drum patterns, whilst Ern and Zorry’s Sneakin’ Bitin’ Dog (written by her Grandpa – Willard Gayheart) is that enchantingly clear vocal with just the slightest echo but otherwise unaccompanied. Lovers on the Run is a perfect slice of classic singer-songwriter stylings, drums and piano in perfect syncopation, a touch of backing vocals and snippets of brass notes behind an unbroken, but not hardened, heart.  Less sad, more stoic, in the face of halfhearted lovers “it’s only after holding me they say they cannot stay” Freeman reflects, before musing that it’s their loss not hers “lovers on the run / are you not the lonely one  / when the road has lost its thrill ?”. This is the song that could crossover to a pop audience. Letters Never Read is such an accessible album – it all sounds right and it all sounds fresh: it’s the calling card of a major artist to be.