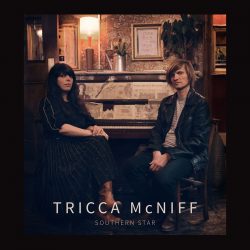 This long-planned collaboration between two stalwarts of the London folk scene, Emma Tricca and Jason McNiff, delivered six songs that combine the feelings of melancholy and excitement one associates with travel. In case the imagery of trains and celestial navigation isn’t enough to send listeners on a journey, Tricca and McNiff namecheck New York, London, Paris, and Rome, letting their obvious affection for these cities shine through.

Their finger-picked acoustic tones blend seamlessly into a consistent sound that’s organic and raw. Everything is out in the open here, production-wise, confidently unafraid of imperfections. As a result, the whole mini album radiates a warm “in-the-room-with-you” intimacy, even during the reverb-drenched vocal and electric guitar parts of ‘New York’.

There is a satisfying symmetry to the record, with the duo contributing three songs each. They open and close singing in two-point harmony, trading solo leads on each other’s material in between. Even though their voices don’t work together as well as their guitars do in the title track, their individual singing is consistently good, and the beautiful harmonies on ‘Paris Rain’ win you back over in the end.

Tricca and McNiff are seasoned songwriters, and the well-crafted melodies and layered lyrics on Southern Star invite multiple listens.

Intimate finger-picking folk that will take you from New York to Rome, via London and Paris, with no ticket necessary.