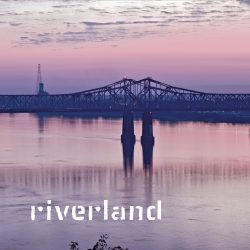 In ‘Riverland’ Mississippi serves as both a proper noun and a metaphor: there’s plenty waiting to be discovered beneath the current and along the muddy banks. Eric Brace, Peter Cooper, and Thomm Jutz are each, in their own right, accomplished singers, songwriters, musicians, and performers. There are long lists of awards, nominations, and chart-topping tunes to prove as much. Sometimes a team of all-stars has trouble gelling as a team. With their second album as a trio Brace, Cooper, and Jutz alleviate any concerns that this may be the case for them.

This is a concept album. All of the songs deal with Mississippi – the state, the river, the people, and the history. At the same time, listeners can’t help but get the impression that Mississippi is serving as a metaphor for something bigger.

The musicianship on the album is top shelf. The trio, their rhythm section, and a few featured instrumentalists contribute to a soundscape that is subtle but rock solid. At no point does any piece of the puzzle get in the way of the combined effort. Everyone seems to know that when you’re a part of something this good, there’s no need to show off.

The album opens with ‘River City’, a song that captures the permanence of transience in the places around America’s first superhighway. The first verse shows us a young man “getting off a boat just for the night” while the next sees “an old man getting off the ride just one more night.”  The two could be separated by generations or they could be the same man separated by a lifetime. They could be lying down in separate rooms of the same hotel on the same night.

From there the album traces a broad historical arc via the technologies, people and events that have shaped Mississippi. The river is graced by canoes then keelboats, steamboats then tugboats, towboats, barges, and tankers. Battles and floods are balanced against pleasure cruises on floating palaces. Giants like Mike Fink, Ulysses S. Grant, and William Faulkner cross paths with sharecroppers, nomads, farmers, and retirees.

In the midst of all of this, the friendship between Tom T. Hall and Reverend Will D. Campbell is held up as an example of getting it right. In their friendship, the trio finds a way of being that is in touch with all of the best parts without being weighed down by any baggage. They are forward thinkers with roots in their history. They are freewheeling nomads with roots in their home. In ‘Mississippi Magic’ Rev. Campbell’s words draw a bright line through all of the tensions and confusion in a place like Mississippi.

“Anyway…
Brother Will D. Campbell was a good ol’ boy
He just had some crazy ideas
When we were born we were all kin
When we’re dead we’ll be kinfolks again.”

Between the moments when it’s magic, there’s the madness . . .  in the madness we find the message.