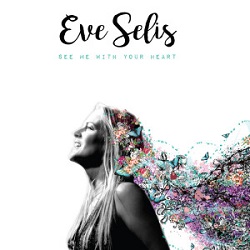 In any other part of the world I’d expect the backstory to this album – Eve Selis’ ninth studio offering – to elicit the requisite sympathy. Eve Selis suffered a torn hamstring in 2014, that needed six months of rehabilitation and this affected her opportunities to make and record music – but also offered her some space to think about herself and write new material that meant a lot to her emotionally. Oh, did I mention that hamstring happened through a rollerblading accident? It’s time to tut, roll one’s eyes and mutter “for goodness sake Eve you’re a grown woman”. Let’s not be too harsh though, with possibly the coolest label name ever – Hippie Chick Twang Records – she deserves to be cut some slack.

She kicks off the album with Fearless Heart which stomps around with a rocking swagger and as much glitter as the cowboy boots Eve Selis sports in the liner notes pictures. It’s a glossy full throated country touched rock song – which see’s Eve trying to summon up the courage “to give my heart to you”. It’s slick, it’s poppy and very different from the follow on track – the blues-rock of Still have a long way to go – a travelling down the road paying my dues number shot through with blues harp courtesy of T J Klay with Eve Selis digging out a deep and raunchy vocal. Some of that introspection hinted at in her biographical material appears in songs like the slow semi-acoustic ballad “Can’t see past myself” which has Selis struggling with her emotional limitations within a relationship “I want to blaze a trail to higher ground / walk up to the edge and look around / I want to face the fear that ties me down ” she sings before sadly adding “But I can’t see past myself”.  Slow Down suggests that things got resolved, to some extent at least, as she urges her lover to “slow down – let me catch my breath / shorten your stride – so I can match you step / take your time give my heart a rest”. Set to a riff distorted from the Stone’s Start Me Up this is not, it is quite clear, a song about hiking rather it’s a song that…err…rocks along.

In this blend of musical styles and dramatic declarations of love, and of fear of holding back, and of a yearning for sexual satisfaction there’s a lot of polish and soft rock / country radio friendliness. There’s an earnest endeavour to convince the listener of some deep emotional veracity, a baring of the soul – but the truth is it’s pop. Great pop can unarguably also make that solid connection to deep feelings or can resonate with one’s own experiences. Sadly, for all the effort, See me with you heart is just pop.

Back on the musical scene after a short injury related hiatus, Eve Selis delivers an ear pleasing, if not too deep, set of songs. Daytime radio airplay surely follows.