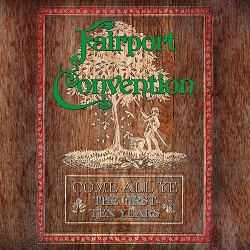 Fairport Convention have announced the forthcoming 28th of July release on UMC of a massive 7CD box set covering their first decade as a band.   It has been compiled by Andrew Batt, the curator of the very successful show, The Lady – A Tribute To Sandy Denny, which toured the UK in 2012, this collection celebrates Fairport’s first 10 years, beginning with their eponymous debut for Polydor in 1968, through all of their seminal albums for Island Records and finishing with tracks from their two albums for Vertigo, The Bonny Bunch of Roses and Tippers Tales.

Now, we know what you’re thinking “sounds great – but I have all this already.  And the expanded Liege & Lief.  And a whole load of concert albums.  Surely I’ve heard this before?”.  Not so – indeed very much not so – the 7CDs contain a total of 121 tracks and of these a whopping 55 are previously unreleased. Highlights include key tracks from all of their classic albums, single B-sides, BBC Radio Sessions, 5 songs from the French TV programme, ‘Pop 2’ (December 1970), 5 songs from the Television show, ‘The Man They Couldn’t Hang’ (1971) and the audio for an entire concert at The Fairfield Halls, Croydon (December 16th 1973) plus 2 songs recorded live for the Scottish Television programme, ‘Anne Lorne Gillies – The World of Music’ (1976).  Impressive.  And remember, as if you could forget, this is the Richard Thompson-era band.  This is the Ashley Hutchings-era band.  This is the Sandy Denny-era band.  This is the band, much as we love Fairport Convention line-ups through the ages (and we do, really, we do), that made the name Fairport Convention.  This is the mother-lode.

And whilst you’re saving up for this lavish release,  here they are, impossibly young, impossibly hairy, and impossibly bearded – the very image of cool London.