Looks like somebody has heeded the clarion call from RS Country a few months back.  Paste reports: “As the epicenter of America’s typically patriotic country-music scene, Nashville is officially combating the hate and bigotry seeping out of Washington. A collective of Nashville songwriters, featuring Mary Gauthier, Derek Webb and Radney Foster, have recorded Strange Freedom: Songs of Love and Protest, a Nashville Resistance Compilation. The album will be released by Nashville indie label Cafe Rooster Records on July 14, with all proceeds to benefit Planned Parenthood.

The project was headed up by Nashville-based Americana songwriter Matt Haeck, who took to Facebook to recruit local artists. “Love is protest and protest is love,” Haeck said in the compilation’s announcement. “I love people and I see vulnerable people getting trampled on. As someone who’s been privileged not to be affected by oppression, I feel responsible to do what I can to fight against it when I see it.”

The result is Strange Freedom, which includes appearances by Mary Gauthier, Derek Webb, Steve Poltz, Haeck, Wild Ponies, Will Kimbrough, Tim Easton, Rorey Carroll, Phil Madeira, Rod Picott, Radney Foster, Rayvon Pettis and Devon Gilfillian. All the songs are new or re-recorded exclusively for the compilation, including a Gauthier outtake of her classic “Mercy Now,” or Poltz’s comical original song “Hey God,” in which he begs to exchange Donald Trump for a range of dearly departed cultural icons like Leonard Cohen and David Bowie.

Strange Freedom follows a string of other recent protest compilations inspired by the 2016 presidential collection, such as 7-inches for Planned Parenthood or the 1,000 Days, 1,000 Songs playlist.

Find out more about Strange Freedom: Songs of Love and Protest at caferoosterrecords.com, and check out the tracklist and album art below. 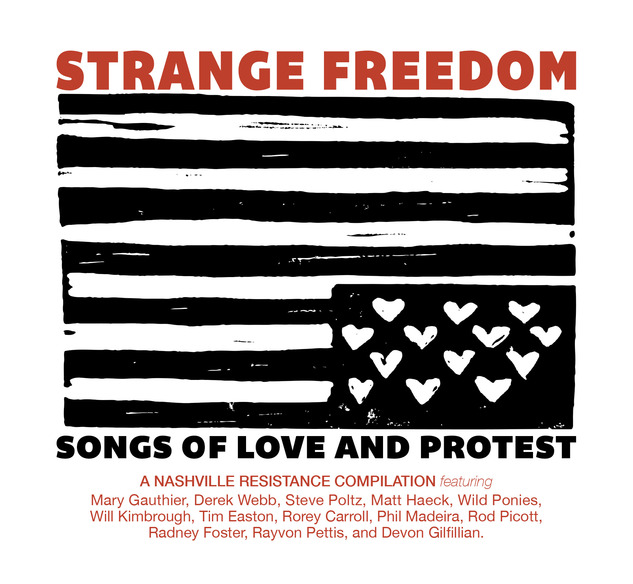