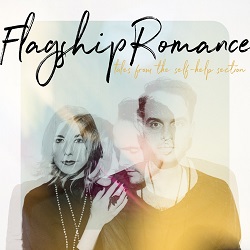 Great band name; awesome title for a record, pregnant with wholesome introspection and whimsy; cool artwork… Knowing nothing about a band at all, one is too often tempted to judge a book (or in this case, CD) by its cover. This was, of course, an approach to music shopping that had some credence back in the days when the music industry wasn’t absolutely saturated with everyone and anyone with an internet connection and the capacity to record a song or two.

Although there is no lack of musical ability in evidence here – a clearly capable pair of songwriters and two nice sets of vocal chords – what appears at face value to be a PVC pocket-full of molten gold sadly disappoints.

There is little that is unpleasant about the radio-friendly country-pop that forms the template for the Florida-based husband and wife duo, but there is also very little to fill the soul with fire. The tone of the songwriting is upbeat and incredibly accessible (if a touch clumsy at times), but largely void of much in the way of intensity. Also noteworthy are the arrangements which skillfully weave together strummed acoustic guitars, mandolins, dobro and gentle percussion, but are undermined by the cleanest of production which sounds painfully mainstream at times.

With fleeting glimpses of musical magic (such as the touching “Garden“, the old-time lilt of “Nemesis” and the ambitious, theatrical acoustic chamber pop of “Big Sur“) come some inexcusable moments that leave you asking ‘why?’ (the awful R’n’B lite of “Naive“, for example). Unfortunately, in light of little that is terribly memorable about the best of the songs, it is the latter that leaves the lasting impression.

As a worthwhile footnote, although this record isn’t going to make it onto my list of albums to revisit in the closing months of 2017, Flagship Romance clearly have a growing following that love what the band do, and that shouldn’t be belittled simply because their songs don’t strike a note with this particular reviewer. Readers should also take note of the duo’s laudable efforts to raise money in aid of providing clean drinking water to the 800 million people worldwide that don’t have access to this, the simplest of basic essentials. To date Flagship Romance have raised over $125,000 for the cause. Find out more here.

Three albums in, there are some hits, and some misses…