Here we go with another glance into the past via our FORGOTTEN ARTISTS series, taking a look at some of the Americana musicians that may just have dropped out of people’s memories or who, perhaps, never received the appreciation their contribution to the genre deserved. This time around I’m featuring a British band that, for a very brief period, tried to create a UK version of the West Coast America close harmony sound that was proving popular at the time. An outfit that boasted some very unexpected members…

In the summer of 1970 we awoke in a strange, parallel universe; one where Hank Marvin and Bruce Welch weren’t the slightly geeky guitarists in Cliff Richard’s backing band. Neither were they in that same band who put out toe-tapping instrumentals that your parents quite liked. No, in this new reality, Marvin and Welch were two-thirds of an almost cool looking trio that appeared to be a British equivalent of Crosby, Stills and Nash. The world had gone crazy!

Marvin, Welch & Farrar were Hank and Bruce’s new venture. Bored by the erratic work pattern of The Shadows and wanting to do something different, they decided to form a new band where vocals would be much more to the fore. Marvin originally suggested a five-piece but Welch was unhappy at the idea of working in another large band, so they started working on some new songs as a duo. Marvin felt they needed a third voice to really get the harmonies going and they remembered an Australian guy who had sung in a band called The Strangers, who had been on the same bill as them on a Melbourne gig, he was also married to Pat Carroll, Olivia Newton John’s ex singing partner, and Newton-John was now engaged to Bruce Welch, so there was already a good connection. They invited John Farrar over to the UK to see if they could work together and the three gelled right from the start; the results taking many people by surprise. Their first album, simply titled ‘Marvin, Welch and Farrar’, was released early in 1971 and immediately raised a lot of eyebrows.

Nobody really knew that Marvin and Welch could sing. Yes, The Shadows did backing vocals for Cliff Richard from time to time but most audiences assumed that, because they specialised in instrumentals, there wasn’t a strong vocalist in the band. It turned out that not only could Marvin and Welch both sing but that they were both perfectly capable of doing lead and harmony vocals, to considerable effect. John Farrar was also an accomplished singer and between the three of them, they had a great sound that was very reminiscent of records that were coming out of the Laurel Canyon scene in America at the time. Not only were the vocals good but the songs they were writing were also impressive, with Marvin proving particularly prolific, having a hand in the writing of every track on the first album and being sole composer of four of them, including an early piece of ecological awareness with the song ‘Silvery Rain’, drawing attention to the environmental damage done by crop spraying – “Nothing moves now, but the swaying ripe corn/ Not a dawn is greeted with a birdsong./ There’s a feather or two from a bird that once flew/ Before a light aeroplane sprayed the fields with a silvery rain.” So far, so credible. The album even boasted a cover from top graphic designers Hipgnosis! 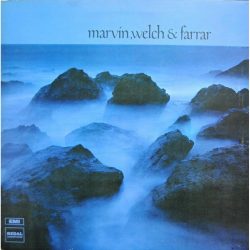 The first album was critically well-received and, although they’d originally planned for the band to be a recording unit only, given the distance Farrar had come to be a part of that unit they decided to tour as well. This may well have been their biggest mistake.

While the band had no problem reproducing their sound live they didn’t think through how to approach the live circuit. This was a departure from their expected music and they needed to get out and find a new audience. Instead, they opted to appear on five TV shows as part of a Cliff Richard series on BBC TV and announced that the band would be joining a Cliff Richard Tour later in the year – where they were billed as ‘The Shadows – featuring Marvin, Welch and Farrar’. It was a disastrous strategy, as Marvin later admitted. The trio were restricted to three songs a night and fans were calling out for Shadows numbers during their set. They weren’t building a new audience and they were alienating the existing Shadows fans by not giving them the music they wanted to hear. Critics and fellow musicians all rated the band and were impressed with what they were trying to do – but the public didn’t want to know; they were too hip for the die-hard Shadows fans and Marvin and Welch were considered too mainstream for younger fans to take them seriously. Their reluctance to cut themselves loose from the Cliff Richard music machine meant the group couldn’t build the new audience they were looking for.

A second album, ‘Second Opinion’, was released in the October of 1971 and, again, the critical reception was good, both in the UK and the U.S, where it was released on the edgier Sire label (they were on Regal Zonophone in the UK) but the public response, in both markets, was disappointing. Again, the album was produced by the three musicians themselves and the quality of the recording is outstanding. ‘Second Opinion’ was subsequently voted the best-produced album to come out of the Abbey Road Studios in the 70s, and this was a vote held among the engineers and producers working at Abbey Road at the time!

The band carried on working, but they were further diluting the quality of the songs they were writing by allowing artists like Cliff Richard and Olivia Newton-John to record cover versions of them. These were invariably watered down, straight-ahead pop versions of MWF’s edgier songs (compare the CR version of ‘Throw Down a Line’ with the MWF original) and further prevented them finding the new audience they were after.

Disillusioned with the lack of commercial success Welch quit the band in 1972. Marvin and Farrar continued for a while as a duo and recorded a further album together, 1973’s ‘Hank Marvin and John Farrar’ but it proved even less successful than the previous albums and, shortly after its release, they bowed to the inevitable and incorporated Farrar into a reformed Shadows. They would continue to feature Marvin, Welch & Farrar songs as part of The Shadows set but the band’s short-lived existence was over.

In the end, you have to feel that Marvin, Welch and Farrar’s failure to find an audience was down to their lack of ambition as a band and their reluctance to stand on their own feet. They had a good sound, one that reflected contemporary trends, and they were writing good material that was being well received by critics and fellow musicians. They needed to step away from Cliff Richard, The Shadows and everything associated with that world, get into some smaller venues and start creating an interest in their new music. Maybe it wouldn’t have worked out, later tracks, like ‘Lady of The Morning’,  were already starting to edge towards weaker, more pop-oriented ballads – but they weren’t prepared to take that chance and that was their undoing. The band is now just a small footnote in the history of Cliff Richard and The Shadows but, for a brief period, there was an indication that they could’ve been something more.