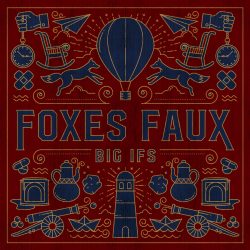 After taking 18 months away from music and gigging in order to start families, Foxes Faux are re-releasing their second album ‘Big Ifs’, hoping to replicate the success of their debut album ‘Fox Tales’, which took them across Europe to Italy, Germany and Austria, to name a few. Each member has a wide array of instruments in their arsenal, ranging from the electric bass and guitar of Ben Snowden and Kurt Wood, respectively, to the 12 string guitar and Bouzouki of Will Quin and Tim Rickaby. This enables a slightly more unique sound compared to the standard folk.

The first song on the album ‘You Got Me All Wrong’, a reflection on friendship and family, starts the album off on the right foot. The melody is instantly catchy, and you can’t help but hum along when they do. It’s unsurprising that they were prolific on the festival scene, including playing at Strummercamp.

But what is one song’s strength, can be another’s detriment. ‘Our Time Is Gold’ is a perfectly good track, and I always enjoy listening to the band have a chat before the song starts, yet it bears too many similarities to ‘You Got Me All Wrong‘ in sound and style of guitar playing. What shocks me is this feels like a sudden blip in the album.

The energy of ‘Bric A Brac Man’ is phenomenal on the other hand and you can picture it going down great at a festival. This showcases Foxes Faux’s punk overtones, key in their sound throughout the album.

The best song of the album has to be ‘Mustang Redemption’, an instrumental track with an unbelievable electric guitar sound. The riff is something special and you feel like you need to whip out the air guitar to jam along with it. When a riff is that good, you don’t care how many times they repeat it throughout the song. Punk sounds again at the fore, it is truly a phenomenal track.

The album documents songs the band have been playing live for the past 4 years on countless UK tours and festival appearances. The album was created with a ‘do it yourself’ work ethic; the music was produced and recorded by Kurt Wood and Luke Yates, the artwork was painted by Ben Snowden, and the packaging/inner illustrations were created by Tim Rickaby. The album’s production, promotion and release was financed by money the band has earned from a relentless gigging schedule.

The work behind the album is admirable, but what it needs is something slow to change the sound. In parts you almost can’t tell songs apart, other than in ‘Mustang Redemption’. The closest they have is ‘Paper Boats’, but it is not the song you should end the album with – not entirely encapsulating their sound, nor leaving that memorable an ending to the album.