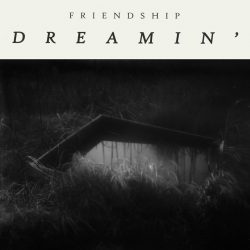 Friendship is a Philadelphia based band headed by Dan Wriggins and currently comprising Peter Gill, Mike Cormier, Evangeline Krajewski, and Jon Samuels.  Their new album ‘Dreamin’’ is a follow up to 2017’s ‘Shock Out of Season’ and if you are not familiar with Friendship then don’t listen to this and expect some full-on, hard-driving Americana.  Nope, this is as laid back as it comes and when you realise that Jeff Prystowsky (of Low Anthem fame) helped with the album, then you can start to get some sort of feel for how this will pan out.

Relaxed and subtle is about as good a description as you can apply to this ambient country-folk work and it has to graft very hard not to stray into dull or even dreary territory, but it walks a very fine line and will certainly most likely appeal to Friendship’s existing cult following.  Some may find the lengthy lyrical soliloquies entrancing others may find them overblown and difficult to relate to, making ‘Dreamin’’ a very Marmite album (for those outside the UK who may not be familiar with it, Marmite is “love it” or “hate it” yeast-based vegetable spread) that will almost certainly divide opinion.

Musical highlights include ‘Dusky’ which is probably the most relatable as Wriggins uses the setting of his own house in Philadelphia to describe the back and forth that exists in all relationships but even ‘Dusky’ seems to get lost in an album where none of the tracks jumps out and where they, and the stories they try to tell, somehow seem to meld into one.

For those into sonic gentleness and often inscrutable lyrics such as those to be found in ‘Not An Exit’ where the driver/narrator states “Can you see those cloudy symbols? One for fine, two for miserable, three might stand for not insurmountable.” Then you may well love ‘Dreamin’’ but others may find it’s just all too similar to stand out in any meaningful way.