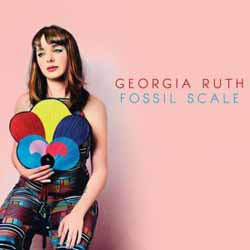 On her second album Welsh songstress Georgia Ruth, nominated in 2014 for a Radio Two Folk Award, offers more radio friendly music although in this instance it’s more likely that it will be Radio 6Music who will be championing her. Discarding for the most part her usual instrument, the harp, and sticking to lyrics in English (aside from her cover of Meic Stevens’ Sylvia sung in Welsh) Ruth layers her voice over a gently pulsating wave of keyboards, synths and guitars throughout the album, the end result a shiny and laid back slice of almost ambient music.

Opening with “The Doldrums”, a song inspired by her then habitat overlooking the Menai Straits and tales from her merchant seaman father of the unnerving stillness of the ocean, Ruth seems to have unfortunately succumbed to that self same stillness. Over 12 songs there is little movement with only brief snatches of Suhail Yusaf Khan’s sarangi offering any respite from the sterile atmosphere. It’s chill out music of a sort that on occasion stirs into life. “Cloudbroke” is occasionally reminiscent of Kate Bush and the rendition of sixties psych folkie Stevens’ “Sylvia” (which drops the synthesised sounds for the most part) with Ruth singing over a rippling electric guitar is quite affecting, the delivery not dissimilar to that of Nico on her first solo album.

Ambitious move from folk to electro which fails to catch sail