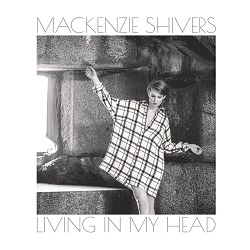 “Living in My Head” is the six track EP follow up to Mackenzie Shivers’ debut album “Neverland”. Citing her influences as, amongst others, The Chieftains, Elton John and Joni Mitchell, the songs on the EP have a richness and maturity to them. The opening track “This River” is minimal, built around an emphatic and hypnotic beat, with a distinctly Celtic feel. Shivers’ voice carries the song, with some interesting and unexpected harmonies which raise it above the ordinary and take a side road from the mainstream that you might otherwise expect.

It’s a bold entrance, but it works well as an opening track, drawing the listener into wanting more. The next tracks introduce the full band and supporting cast with Cody Rahn on drums, Yuka Tadano on bass, Mike Ceglio on guitar, Sarah Haines on vocals and viola and Kama Dimitrova and Jess T. Clinton on backing vocals. “Lily-rose” with its insistent nagging piano, easy rhythms and hooky chorus is impressive and Shiver’s voice and harmonies in the lower ranges is reminiscent of the Corrs’s. “Disco’s Dead” keeps the listener guessing. Building from a mellow intro it finds Shivers lamenting her “shitty black shoes” before pronouncing the death of disco, over an energetic backing, and featuring some driving drums and great guitar work by Ceglio. The language and pace of the song is in stark contrast to the purity and tone of Shiver’s vocal style, and makes for an interesting combination.

“Names” is a wholly different affair, laid back, lilting and relaxed, with thick harmonies and a strong folk backbone. It has an almost nursery rhyme quality to it, with the military style rhythm that underpins the song, producing a hypnotic effect. Its all held together with some terrific harmonies and instrument arrangement, particularly the sparing use of the viola and organ. Track five, “Tell Me To Run” is less successful. Although maybe more immediate than some of the other songs, the repetitive chorus can drag after a while and it’s hard sometimes to decipher Shivers’ lyrics. In this sought of music the narrative and story is important and when she is singing in the higher ranges, the words can be hard to catch. Also, where the previous track felt easy, this one felt more contrived and formulaic. The final song, “Living In My Head” gets back on track, demonstrating the ‘less is more’ principle as its power comes from restraint and like the opening song, leaves you wanting more.

The EP is well produced with some interesting twists (such as the use of what sounds like a reverse snare on “Names”) and when combined with Shiver’s evident song-craft (and the strong backing of those around her) it adds to her credibility as a serious artist and one to watch.

Emotive and powerful, the songs might be living in your head soon!

Melissa Carper is a talented singer-songwriter and upright bass player who is worth our intention if for no reason that one of her bands is The Carper Family.  Today’s song though is the Western swing […]

Here is the sublime new single from AUK-favourite Robert Vincent.  Vincent is nominated in two categories at the upcoming AMAUK Awards: UK Artist of the Year and UK Album of the Year for the acclaimed […]