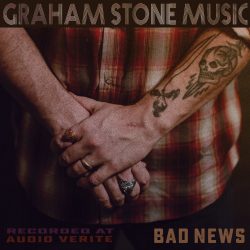 Graham Stone’s sophomore album ‘Bad News’ clearly has a wide range of influences, with rock, blues and up to date folk music finding its way onto the album. The album was recorded in Richmond, Virginia, the state where Stone was born and currently lives, and spans a whole decade of Stone’s songwriting reflecting the range of influences and style of bands that Stone himself has played with over the years.

The title song ‘Bad News’ has an old school country feel with a warm acoustic guitar opening and simple drum beat accompanying it. His lyrics are straight to the point; the world is currently filled with bad news that makes you want to burst into tears, and sometimes it is just better to “turn off” from technology and to “walk outside and not focus on the bad news.” It ends on a slightly humorous note, taking a joke out of the US President’s favourite saying: “the world full of bad news and that ain’t fake news.”

‘Nobody’ is one of the few songs on the album that you could sing along to. With its easy repetitive chorus this sets a different tone from the rest of the album with a strong country-western feel to it, and a chorus of backing singers throughout the song.

Throughout the album Stone demonstrates his varied musical influences but its rather disparate nature is perhaps both its strength and weakness.