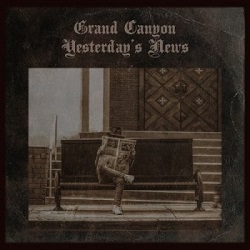 Joan Jett succinctly stated that “I love Rock and Roll – So come on take some time and dance with me“. Of course Alan Merrill and Jake Hooker wrote those words for her, but you get the point. Joan Jett is not alone in this attitude as LA’s Grand Canyon would happily sign up to this manifesto. Grand Canyon are a group of accomplished musicians who have played in their own bands and spent studio and stage time with a range of acts – they are, in short, successful “side men” who have come together due to their shared love of classic rock and ‘Yesterday’s News‘ is a 5 track EP which demonstrates this to great effect.

Grand Canyon’s music unashamedly shows their influences – and looming large amongst these is Tom Petty. ‘High Time‘ starts with a riff that could have fallen off any early Heartbreakers album and leads into a song that hints at the pop chart troubling songs from ‘Southern Accents‘, with Casey Shea’s vocals sitting somewhere between Petty and Chuck Prophet. The layered keyboards of ‘It is what it is‘ answers the question what would Journey have sounded like if they’d had Petty as lead singer? Pretty glorious, it turns out, especially when Amy Wilcox adds her harmonising vocals. The title track is a superb act of bravado – on one level refusing to accept romantic constraints and on another running through a potted history of the last forty years or so with reference to popular culture and significant couples of each decayed decade. It also shows that someone in Grand Canyon has been listening to Southside Johnny & The Asbury Jukes.

Just as Nicole Atkins and Mark Lanegan showed last year with their countrified version, Grand Canyon’s acoustic take on ‘November Rain‘ is proof that almost certainly the worst version of this song on record is, rather ironically, the bombastic original by Guns N’ Roses. This gentle reading, by contrast, is atmospheric and teeters on the edge of heartbreak. The major song of the EP though is ‘21st Century American Man‘ which blends in psychedelia with anthemic rock statements, that on one hand defiantly announce an intention to “not choose to be a Common Man” whilst on the other the dregs of the American Dream are dragged out for perusal: “everyone’s shouting into the darkness / I don’t know what to believe / Turn on the TV / LA is burning / They say there’s nothing, nothing, to see“.  All this is framed within a series of guitar solos and twinkling keyboard effects that add a certain majesty to the endeavour.

Grand Canyon's LA rock stylings a re a pleasure to hear