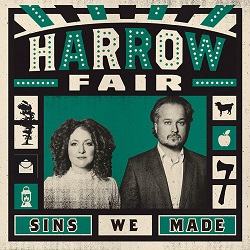 Three years on from their fine debut, Harrow Fair – Miranda Mulholland and Andrew Penner – return with a second serving of their darkly thumping amalgam of folk and rock – and thudding almost Glam Rock at that – and subtle and haunting straighter folk-influenced songs. It’s an eclectic mix. There’s a powerful opening with crunching guitar and powerful violin on ‘Dark Gets Close‘ for a discordant vision of optimism which finds a resolution in dark depths: “Even when the future isn’t clear / Even when the words all disappear / Just because you can’t remember hope starts here / No courage without fear“.

The pair like to twist expectations, the sweet-sounding ‘I Just Wanna‘ plays with a sixties girl group vibe as Miranda Mulholland coyly plays with euphemisms as she sings of eschewing modern directness because  “I’m an old fashioned kind / … / I wanna shoop-shoop / I wanna shamma-la-la-ding-dong with you.”   Andrew Penner’s response shows that chivalry is dead and buried “I don’t like these olden times / …/ I’m a new fashioned kind / But if you want then I can pretend.”  Make no mistake – they both want the same thing, it’s just the delicateness of the wrapping that differs.  There’s more subversion on the softly entwined acoustic guitar, violin and piano slow ballad ‘Rich Looks Cheap to Me‘ – a joint rejection of flash in favour of something more honest, something with character and a backstory rather than the superficial attraction of the trappings of wealth.  There’s a political subtext in there as well, as Mulholland sings “rich looks cheap to me / like a house with no memory / like a leader who answers to nobody / rich looks cheap to me.”

At the other end of the musical spectrum is the dirty stomping of ‘Rules of Engagement‘, which is a heavy chorded put down of one who’s getting a might too uppity in their opinion of themselves “You say that nothing’s too good for you – but she is“.  This is the cross-the-floor grooving song of the album.  Taking the tack back towards subtle is the gorgeous instrumental ‘Shiloh‘  with a martial air added to the violin playing that echoes like the ghosts of thousands of blue and grey-clad soldiers.  The title track closes out the album with a folk stomper that twice counts through eight dramatic images without – like, say, ‘Seven Curses‘ – revealing what mystery is being alluded to – leaving the listener with an enigmatic riddle.

Andrew Penner and  Miranda Mulholland have made another darn near-perfect album of Americana duets that, for all the musical changes, flows beautifully from start to end.

Triumphal return of one of the very finest Americana duos. Canadian, of course.