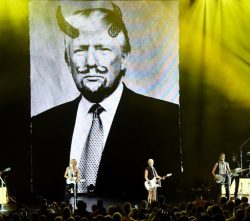 We love country music here at AUK, but the politics of mainsteam country can be something of a turn off in these weary times, so this is a nice article from Billboard reporting on country anthems with a progressive bent. They report: “Last week, Garth Brooks revealed an alternate version of the music video for his 1992 single “We Shall Be Free,” an inspirational song from his album The Chase that features the sort lyrics rarely heard on country radio: progressive. The newly unearthed clip, which Brooks debuted on his Facebook Live chat “Inside Studio G,” had been updated from its original version in 2002 and incorporated footage from 9/11 alongside cameos from celebrities like Al Gore and Michael J. Fox. Brooks had never released the updated video, but decided to do so after seeing a renewed interest in the song, which turns 25 this year.

The song itself promotes a message of inclusivity, with declarations that the song’s titular freedom can only come, “When the last thing we notice is the color of the skin,” or, “When we’re free to love anyone we choose.” While it would be surprising to hear that message on country radio now, it was especially taboo in the early ’90s, with Brooks himself recently telling People, “I didn’t think it would be controversial but when this song first came out, it was not welcomed with opened arms.”

Though stereotypes would have casual listeners believe that country is conservative through and through, Brooks is far from the genre’s only artist to explore progressive messages in his music. Fellow pillars of the genre like Willie Nelson and Dolly Parton have pushed the political envelope in their music, as have relative newcomers like Kacey Musgraves and Eric Church.

Here are 10 country songs — both classic and contemporary — that show off the genre’s progressive side.