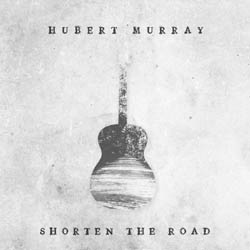 Galway born Hubert Murray is already acclaimed for his flatpicking and slide guitar skills through his work with The Hot Rock Pilgrims and “bluegrass fusion” band Lands End. On Shorten The Road, his six track debut EP he steps up to the mic and proves he’s also a very accomplished singer and writer. If it weren’t for his bio one would swear on listening to the EP that he’s escaped from Texas as soon as the opening song “Will You Love Me Again” is out of the trap. With his guitar and assured voice accompanied by Leanne Thorose’s mandolin and harmony vocals it’s a bitter sweet country styled slice of life, the singer pleading for his lover to give him one more chance as he recalls their good times. Played with a nimble dexterity it wouldn’t be out of place on a Steve Young album.

“Where We Last Met” is a country waltz with a harder edge than its predecessor, the guitar more strident with Murray’s voice quite powerful but on occasion tending towards the melodramatic. “Can’t Stop Playing The Blues” however sees him well back on form on this jaunty country blues number that features banjo accompaniment from Paddy Kiernan. It’s a wonderful confection of jug band syncopation and laid back Mississippi ramblings recalling acts such as John Sebastian, Taj Mahal and more recently Daniel Meade’s Flying Mules. Kiernan returns on “Run Buddy Run”, the guitar and banjo here evoking a chillier atmosphere as Murray paints a picture of a man on the run for some undisclosed reason, his voice here reflecting the protagonist’s desperation.  “Slapstick” is an opportunity for Murray to display his guitar playing with some terrific bluesy runs while his arrangement of the traditional “Sally Goodun” showcases his guitar picking expertise of which someone like Stefan Grossman would most definitely approve. Hopefully we won’t have too long to wait to hear a full album from this talented chap.