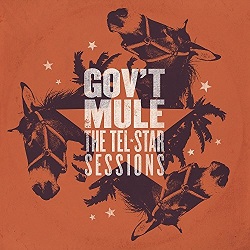 The Tel-Star Sessions consists of the previously unreleased earliest recordings by the original line-up of Gov’t Mule. Gov’t Mule was formed, in 1994, as a side project by Warren Haynes and Allen Woody who at the time were playing with the Allman Brothers band – with some spare time between commitments to their day jobs they decided to record a low-budget album and play a few shows, roping in Matt Abts to be the drummer for the trio. The concept for the recordings was to play live and loud and capture the excitement of a quintessential power-trio, and it is fair to say that this was achieved. The ten tracks presented are a heady blend of blues-rock, somewhat reminiscent of Mountain or Free in a few places, and represent a band very much out of time – this was not the prevailing sound of the mid nineties. Had this music achieved the planned release it would have seemed like a lost artefact from the late sixties / early seventies.

The concerns of the lyrics are the classical themes of the heavier end of the jam band – the wilful ways of women, the need for freedom and to stay to true to oneself. There’s a disregard for riches and fame on Mother Earth which, over a doom laden bass line, points out that “you may fly in an air-plane baby and fly all over this world” but this is for naught “I don’t care how great you are don’t care what you’re worth / when it all comes down you’ve got to go back to Mother Earth”. Warren Haynes’ guitar soloing here is sublime – as it is pretty much across the album. There’s some dabbling with social issues.  Monkey Hill paints a picture of city life lived on the edge, stabbing guitar and pulverising drums beat out the theme of hopeless desperation “some brother testifying this evening talking about how he lost everything / he said : gonna get so high that I just don’t know my name”. World of Difference – which appears in two versions each as full of merit as the other that it hardly seems strange that they are placed back to back – questions the motivation behind the endless conflicts that bedevil the world “hate breeds fear / fear breeds sin / survival is your only friend / when we die – we’re all the same….so tell me what you see when you look at me….close your eyes and you’ll see a world of difference”.  Right on man, right on.

The album hasn’t been prettified up – there are count-ins and some studio cross-talk – but this is not in any way a detraction from the overall feel. Instead it adds to the sense that the music is pouring out live and undiluted. This is big, powerful, classic rock – drums, bass, and guitar with wailing vocals. Gov’t Mule are a band that can really play, a muscular rhythm section and guitar solos that fly off in all directions and then come back and stitch the song to the ground. And that’s the way…uh huh uh huh…I like it.

Hard rocking first recordings finally get a release – if you like power trios then prepare to be blown away.