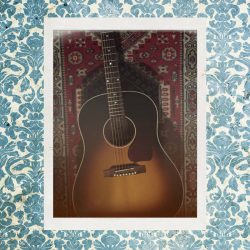 Jacob Faurholt is a Danish folk singer-songwriter with over 10 studio albums recorded and released under his own name, alongside some more experimental work under his Crystal Shipsss alias. ‘Sad People’ is a collection of intimate songs with minimal overdubs recorded at his home studio in the town of Aarhus, Denmark and serves as a precursor to an upcoming full studio album to be recorded this spring with some local musicians.

‘Sad People’ is a very brief record of just 4 songs, all of which sit around the 3 minute mark or shorter, in the case of the opening two tracks. This truly is just a taste of what Jacob Faurholt has to offer and for new listeners wouldn’t provide much insight into his musical output, but for those craving more from the artist, this is perfect. ‘The Horror’ is an acoustic track reminiscent of Bob Dylan due to its very particular phrasing and vocal delivery, which is never a bad thing, although clocking in at 45 seconds it’s more an introduction than a fully fledged track. This is a shame as it shows plenty of potential.

‘Sad People,’ the EP’s title track is much more representative of Faurholt as a songwriter and is the first fully fledged song – a traditional folk number led by minimal instrumentation with the focus on the hypnotic vocal melody and the repeated phrase of “Sad People” throughout. While it sounds like a typical folk song on the surface, there are elements of subtle experimentation weaved throughout which makes for an interesting listen.

After the abrupt end of ‘Sad People’ comes ‘Halloween Pumpkin,’ the centre point of the album and by far the stand out track on this short collection. It’s an intimate ballad of introspective lyrics with a tender melody throughout and the occasional electric guitar line to create texture and atmosphere. It’s a testament to the quality of the songwriting and also a much better indication of what Jacob Faurholt has to offer.

The EP is brought to a close by ‘Set Me Free’ and is another personal track of anecdotal storytelling with a great melody and again showcases the songwriting talent in its rawest form – Faurholt playing a great song on an acoustic guitar and captured in the moment on tape.

Overall, ‘Sad People’ feels a bit half-baked as the first two tracks are seemingly just ideas for songs rather than the finished article, whereas the two brilliant tracks on the latter half of the EP showcase Faurholt as a fantastic singer-songwriter and create some momentum for what is to come on his next release. The execution of the record is fantastic and by design, it was intended to be considered a set of ‘handwritten alternative folk songs’ as it displays the songs in their purest form and captures some of the magic of the songwriting process often glossed over in final releases which adds to the charm. However, for all that it feels as thought this would have been better released as a ‘Halloween Pumpkin’/’Set Me Free’ single.

A raw collection of alternative folk songs with moments of brilliance