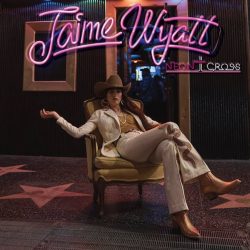 This record does seem to come with a fair amount of hype. One of those that ‘takes Americana to a different level’ pitches.  The ‘new Queen of Outlaw Country’, so we’re told. Wyatt’s backstory jumps from the pages of the Country Music Tragedy 1.01 textbook. She had the world at her feet, lost it all to addiction and incarceration, and she’s clawed her way back, here with Shooter Jennings at the controls.

Wyatt’s voice carries her pain and suffering, quite evidently, but it’s not broken or cracked, just straining to tell her story through heavy, pathos-laden, earthy lyrics.  So, to the songs. ‘Neon Cross’ is pretty radio-friendly country rock, whilst still retaining guts and grit inside its galloping beat. ‘LIVIN’ is a good old-fashioned slow, loping country two-step. Wyatt’s lyric recounts her toils and troubles as per country’s best traditions. ‘Just A Woman’ is a sumptuous, slow country ballad – sprung straight from the Tammy Wynette/Billy Sherrill ‘house of pain’ playbook. It’s a definite highlight.

The ‘different level’ that this record takes the listener too probably isn’t that different, if we’re being honest. It sits somewhere between the edges of a shiny, contemporary Nashville sound and the retro 1970s feel of the ‘Outlaw’ country movement. Lyrically, Wyatt would struggle to find a mainstream audience – her pithy words would be bleeped or blanked into a nonsensical place. Nonetheless, songs such as ‘Goodbye Queen’ have a radio-friendly country rock feel. ‘Hurt So Bad’, with Shooter on the backing vocals, probably ties in the essentials of the record; it’s retro-contemporary, rebellious but just conformist enough. Closer ‘Demon Tied To A Chair In My Brain’ is misery and suffering in the starkest of forms. Country meets Leonard Cohen, if you will. Fiddles and pedal steel stretch the pain out until it’s just too much to bear. It’s the only way a good country record should end.

Not quite the ‘next big thing’, but a beautifully crafted and diverse, retro-modern country record