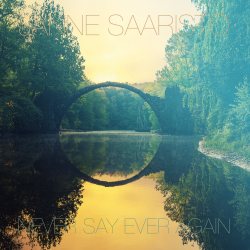 Janne Saaristo is from Sweden. Gothenburg, to be exact. It’s important to be exact. In ‘Old Dogs’, the opening song of his second album, the ex-punk sings that “even an old dog can learn” and all about “masters and slaves”… which is interesting, as Saaristo appears to be a songwriter enslaved to an aesthetic that he’s developed rather than inherited.

Does that matter? Not if the songs are great and the singing moves listeners. The jury is out, though. Sure, the instrumentation is on-point – strummed acoustics, pedal steel, electric pianos and ethereal organ hums – but the melodies meander and the vocals never threaten to move mountains. ‘Chimes Of Freedom’ is a song that reflects its truth for all souls to see from a mountain – but Saaristo’s cover here is just karaoke.

Therein lies the rub: ‘Never Say Ever Again’ is a record in awe of everything that has come before it and never once places the future in its sights. ‘Yesterday’ (dangerous song title) is lovely with nice strings and a lilting beat, but the saccharine likes of ‘Broken Promises’ and ‘She Thinks I Still Care’ are over-sentimental and play precariously with pastiche.

“Just because I rang her number by mistake today, she thinks I still care… “ goes the latter and is a lyric that does Saaristo’s lachrymose laments no favours. It comes late in the album, but it’s not too late to reveal all.