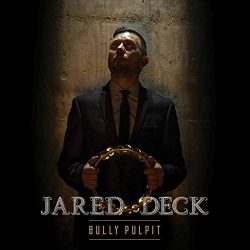 Not many tracks are under the belt before you start to get a good feeling about Jared Deck. He sounds familiar, but that’s because we’re familiar with great music. He sounds a little hard-bitten, until the empathy of moments like ‘Where I Fall’ give the lie to the more embittered extremes of this emotional rollercoaster of a record. From the factories to the rock ‘n’ roll stages of Oklahoma and beyond Deck is chasing the dream down hard, leaving potential careers in the church and politics in his wake. He comes from the same school as Steve Earle and more recently, Sam Morrow. A little bit rock, a little bit country and all served with a healthy dose of soul.

The Southern church influence is strong from the start and the traditional ‘I Don’t Know What You Come To Do’ has been rearranged and updated by Deck and his team while retaining the heavy gospel strains and boosted by the backing vocals of “Oklahoma treasures” Myra Beasley and Chanda Graham. The pulpit hand-clapping, percussion bashing and religious ecstasy-style screaming complement the raw guitars. It’s a powerful but slightly false start as the album soon settles into a more regular pattern of working through hard times in a small town. It’s a tried and trusted formula and Deck has the life experience to go with the talent to get ahead in the game.

A fine contingent of musicians has been assembled for this, the follow up to Deck’s 2016’s self-titled debut by Grammy-winning producer and wingman Wes Sharon. ‘Make Your Mama Proud’ is country with folk overtones as the renowned fiddle of Byron Berline (Flying Burrito Bros, Linda Ronstadt, Rolling Stones) is brought out to emphasise the tale of a father from the wrong side of the tracks who knows his little girl is better off with his mum. And if this leaves you wondering about those embittered extremes mentioned earlier, then ‘next up is ‘Great American Breakdown’, which leaves the listener in no doubt as to the dark side of this complex character. When those rasping vocals wrap themselves around lyrics like “I’m not the devil just the devil you know” and “It’s an American Breakdown/Just another politician shakedown” then some of Jared Deck’s disillusionment in his former paths and his qualification for the music of hard experience becomes clearer. Not one to be boxed into a corner, ‘True Believer’ sees our leading man take on the role of the forbidding Southern evangelist, sending his flock out with guns to rid the God-fearing world of false prophets and corrupt politicians. Phew! ‘Sometimes I Miss Being Lonely’ is an almost classic country lyric in the style of George Strait. You know the sort of thing, boy meets girl, falls in love, girl leaves with kids, dog gets run over. Except there’s a twist here. Deck is musing on a life that has it all, but, well, the clue’s in the title. It is overflowing with soul and is a contender for the outstanding song with its interchanging blues guitar and piano, courtesy of Clayton Roffey and Jim Robinson.

“Folk music is who we ought to be, rock-n-roll is who we want to be, and country music is who we really are. Personally, I find a bit of myself in all of them.” With one line, Jared Deck sums himself up nicely. All that’s left to add is that perhaps he does himself an injustice and there’s more to him and his music than all of those three elements. ‘Over And Over’ closes the album as a redemption to all that went before. A reminder that the things that cause us pain help us see things more clearly as we move forward. It’s a sparse ballad, a strong, wide ranging vocal by Deck over his strummed guitar and Walker’s organ. Gospel-tinged to the end, the team of backing vocalists sing us out, leaving us alone with our thoughts on what was a lot of enlightened music in such a short space of time. Better play it again.