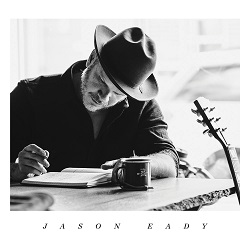 Six albums in and Jason Eady goes eponymous… could there be a hint of self-reflection and insularity in the mix? This album is certainly a distinct departure from the overt twang and clatter of his previous work, and the subtlety and far more gentle vein prove a welcome relief. Acoustic throughout (pretty much without exception) and deviating little from the ‘original Nashville sound’ (think Willie Nelson meets Kris Kristofferson meets [albeit latterly] Lyle Lovett),  the record presents the artist as a purveyor of familiar musical staples – indeed there are no rules that come even close to being broken here.

Having said that, the album showcases some solid and often moving songwriting – Barabbas is simply heart-melting and Not Too Loud, a study of the emotional complexities of parenthood, recalls the simple beauty of Neil Young’s rendition of Four Strong Winds without the fuss of his slightly overblown arrangement. Elsewhere, when the tempo lifts, parallels can be drawn with the rugged, front porch acoustic straightforwardness of Levon Helm’s stunning Dirt Farmer album.

This time around Eady’s stated intention was to present music he wanted to write on his own terms and, with little doubt, the honesty behind his mission statement shines through. His songs are without pretence and his delivery is at worst uncontrived and at best utterly captivating.

The sixth album from Jason Eady is a gentle, rugged country music gem.