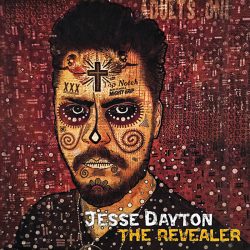 Jesse Dayton has had quite the career, playing alongside true legends like Johnny Cash, Willie Nelson and Glen Campbell, time spent making soundtracks for horror movies and even venturing into punk for a spell in the LA band ‘X’, it seems that he can turn his hand to almost anything and ‘The Revealer’, his ninth studio album, serves as a melting pot which sees him take something from each of these influences an blend them into his own sound.

The 12 track album kicks off with the foot-stomping Daddy Was A Badass and then launches straight into Holy Ghost Rock N Roller a pure rock and roll number, as the title might suggest. These two tracks really set the tone for the record – upbeat, energetic and a lot of fun. Right away it becomes evident that Jesse Dayton isn’t confined by genre boundaries and is just making music he wants to make with the punk energy, the lyrical imagery of country music and guitar solos reminiscent of classic rock and roll and he wears those influences unashamedly on his sleeve pushing the boundaries of what Americana can be.

Throughout the rest of the record, we are treated to a plethora of brilliant songs from the short and sweet ballad The Way We Are, the intensely catchy Eatin’ Crow and Drinkin’ Sand and the pure southern sound of Possum Ran Over My Grave and Jesse Dayton doesn’t step a foot wrong throughout the entirety of the album. Take Out The Trash is a another energetic track chronicling a break-up featuring one of the best guitar performances on ‘The Revealer’, although these are in no shortage as Dayton has mastered the art of the guitar lick and it really is no wonder why he has played on stages with such prolific artists over the course of his career. Towards the back half of the record, the energy slows up a bit and there are a number of more traditional singer-songwriter songs which very much lean towards a country sound and while not as immediate as the first half of the record, the quality never falters. Match Made A Heaven is a duet with Brennan Leigh and their voices compliment each other perfectly. Never Started Livin’ the penultimate track is an old fashioned love song, again, complete with a brilliant guitar solo but the album highlight is the frantic I’m At Home Getting Hammered (While She’s Out Getting Nailed) which is the epitome of everything Jesse Dayton is – brilliant musicianship, high energy, personal lyrics and a touch of humour.

In summary, ‘The Revealer’ is a superb album which really does have something for everyone both lyrically and sonically. Throughout the 12 tracks, there is an amalgamation of influences and sounds that are pieced together so seamlessly to create a sound that touches upon so many genres, you couldn’t classify it as anything other than great music. Jesse Dayton has been releasing music since his first solo record came out in 1995 and it shows throughout ‘The Revealer’ – here’s to another 22 years!