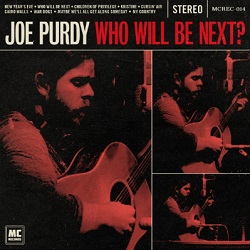 Neil Young, around the time of his Living With War, bemoaned the absence of other, and younger, protest singers. This was never really true, the difference was the level of media attention such artists could attract – and to be fair to Ol’ Neil he recognised this by showcasing songs on his web site. This is all by way of saying that Who Will Be Next? sees Joe Purdy more than fill this gap. It’s like an early Dylan album – in the sense that there’s a few personal songs mixed in with others that are in full protest mode, and also in the sense that a few of the melodies might sound a little familiar. So what, when the outcome is so good ? The title song is a brutal tearing apart of the glorification of guns in American culture, it pulls no punches in railing against the ridiculous stance of the NRA and their supporters contrasting the campaign rhetoric of “papa won’t you tell me is it true what they say ? / They’re taking our weapons on election day ?” with the reality of gun spree massacres and everyday accidents “My baby sister got a slug in her head / she found my pistol and now she’s dead”. The sense of a hopeless wastefulness of effort and life is captured in the closing couplet “nobody told me there’s no glory in dying / I shot these strangers now I get mine”.

Children Of Privilege takes a spotlight to bigotry and the barely hidden undercurrent of racism in the USA. Identifying himself as one of the privileged, Joe Purdy lays it out flat for all to see – “if you never had to fight for your life or your family / If you never had to live on the streets all alone / If you’ve never been harassed by the ones who should protect you / If you’ve never been mistreated for the colour of your skin / then listen all you Children Of Privilege ‘cos I am one of you”. It all pours out in a contained rage to the accompaniment of a single acoustic guitar, and turns on an appeal for more compassion rather than violence and oppression. And it becomes a sad reflection that this is, in effect, Joe Purdy’s contribution to the recent election debate – and we know how that has turned out. When he turns his attention more directly to the personal – as on the Townes Van Zandt like Kristine – Joe Purdy is a wonderfully engaging narrator. This guitar and pedal steel song relates a car journey across America, just Purdy and his dog, and thoughts of Kristine. It’s beautiful in its simplicity and sparse use of language, laying out a series of futures, starting and ending with what seem to be the most likely – “maybe I’ll play for all the people I can find / maybe I’ll go to Nashville and hit the big time / maybe I’ll change the world like my mama said / maybe I’ll just get stoned and call Kristine”.

What makes this album worth hearing is that Joe Purdy delivers all the songs with conviction, his arguments one would hope are persuasive or at the least would help some who hear them question their pre-programming and ingrained attitudes. One can hope, hoping is not yet a crime. And because of this Who Will be Next? sits in a tradition from Guthrie, Dylan and others, through Steve Earle up to today. Sits in that tradition, has its rightful place, is not shallow of intent but burns with conviction and a zeal for a better world. Sometimes songs should matter, sometimes they do matter. Joe Purdy matters.

Joe Purdy takes the USA to one side and tells it like it is, lays out the facts and questions the responses. What more can a songwriter do?