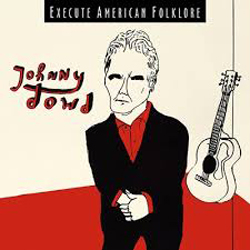 By now you either get or don’t get Johnny Dowd. Ten albums in this Ithaca NY resident continues to move further into the outfield with each release. Execute American Folklore features Dowd’s darkly humorous and idiosyncratic lyrics, his pronounced drawl becoming ever more robotic, over a hyperkinetic drum machine with guitar, keyboards and bass fed through pedals and gizmos, fuzzed and funky and above all freaky. Originally lumped in with the Gothic Americana crowd Dowd now seems to have more in common with Snakefinger, sometime associate of The Residents, psychedelic funk and on several songs here, that brand of Tropicalia as practised by Os Mutantes while the grim humour approaches  Lenny Bruce satire.

Opening with the threatening funk of Unease and Deviance a devilish disco beat pulsates as Dowd prowls through a Burroughs’ like American nightmare. 3.29.48 takes us further down the twisted rabbit hole, back to Dowd’s birth date with his tortured guitar a mutant Texas blues lick as he builds a mythology around his life, a theme he returns to on the closing song. The thrombotic pulse is revisited on the deadpan story of a 9-5 guy who discovers his wife in flagrante delicto with his best friend’s wife in Sexual Revolution while Last laugh, a song dedicated to a call girl mother is packed with religious imagery as Dowd threatens retribution on the bosses and the rich drawling, “This dog’s gonna have its day.”  Freddie adds some sly funk and skittery guitar, drawing Curtis Mayfield into Dowd’s alternative universe, there’s some fine George Clinton like stew on Funkalicious with its helium voices and maggot brained guitar and Whiskey Ate My Brain hits the neurotransmitters with as much force as the cocaine which ate my nose (as Dowd sings here) on a swift denouncement of various stimuli

There are descents into musical mayhem; Mr. Muggles mashes industrial strength pile driving rhythm with TV theme tune funk and a demented vocal from Anna Coogan. She operatically cries, “I’m getting high, high, high” with Dowd then growling “with Mr. Muggles,” reclaiming the pot term from harrypotterlalaland while the title song is another frantic dash with Coogan again adding her voice to the din.  Amid the din and cacophony Dowd offers up some exotically perfumed songs which, while never approaching pop status, nevertheless have an almost narcotic pull. Rhumba In The Park is, as it says, a rhumba and a delicious one at that. Dowd abandons the vocal embellishments and sounds almost vulnerable as tells the story of a country boy bewitched by a city woman which is probably not as straightforward as it seems. Brains-a-flame is another exotically exciting torch song with a Cuban feel, the guitars here organically entwined, tropical vines winding around the sultry vocals of Anna Coogan who stamps her authority here with an almost orgasmic delight. Finally there’s the closing fuzz driven anthem of A World Without Me were Dowd proclaims that without him life would be fantastic, the sun would still shine, memories of him would quickly fade. Recalling the excellent Why (from Dowd’s last album That’s Your Wife On The Back Of My Horse) Anna Coogan again pitches in responding to Dowd’s pessimism as she sings, “Johnny, Johnny, you’ve got it wrong.” Soaked in swirling guitars with extraterrestrial synth sounds throughout Dowd here creates a piece which is on a par with the best of Beck.

Idiosyncratic as hell, Johnny Dowd is the horseman of an Americana apocalypse