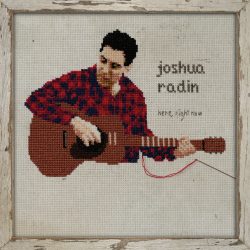 It’s hard to begin listening to a Joshua Radin record without it conjuring visions of the kind of melodramatic scenes that might feature in a certain breed of US television drama. Radin first found success in 2006 when actor Zach Braff had a hand in selecting one of his songs for his movie ‘The Last Kiss’, from which Braff got Radin’s songs featured on a number of episodes of his television series ‘Scrubs’. Over the past decade or so, Radin has gone on to become a familiar voice on American network TV, becoming one of a crop of singer-songwriters whose names became ubiquitous with a particular kind of heartstring-pulling drama (his songs were in multiple episodes of ‘One Tree Hill’ and ‘Grey’s Anatomy’, for example).

It’d be easy to dismiss him as one an uninspired group of musicians not worthy of a further listen, but there is much more to be discovered if you open your ears and mind.

The opening album track ‘Here, Right Now’, was written in the wake of a breakup as a reminder to himself to stay present in relationships; “You’ll never know what you can be / Till ya come to realize / In the rear-view all that has hurt you / It’s just a passer-by,” he sings delicately. Another song on the breakup theme is ‘Only a Wave (Better Days)’, which tries to look positively to the future in the wake of his regrets over trying to fix his now ex-partner (“I know there must be better days / Right around the corner / Maybe the life I’m meant to live is / Out in California, someday.”) ‘You Got Me Thinking’ is hopeful too, with Radin starting to open up to the idea of a new relationship, pain and all; “’Cause you got me thinking I wanna take my wall down / Shed my disguise and brace for the fall down,” his voice comes with fragility (alongside beautiful harmonies provided by Maria Taylor).

‘Don’t Let Me Hurt You’ is a real highlight with its lovely harmonies provided by Z Berg (daughter of producer Tony Berg) and lyrics that will speak to anyone who has ever suffered problems with self-confidence. “I’m running reckless, I crash through the door / Calling for someone to find me / A couple of stitches and glass on the floor / I got this scar to remind me / I look at myself, it’s the first thing I see / But no one else knows it’s there,” Radin reminds us how we often see ourselves in much harsher terms than others do.

There are two covers on the record, the first being the Rolling Stones 1967 album only track ‘She Smiled Sweetly’, which Radin imbues with his characteristic quiet sweetness. The second cover is of the Tom Petty classic ‘I Won’t Back Down’, which – while originally written by Petty as a declaration of defiance in the wake of an arsonist burning his home almost to the ground – in Radin’s hands with this collection of songs feels like a reminder to himself to stay strong in the ruins of a relationship.

There are missteps in the album, with some songs sounding so similar you’d swear you already heard them, but the most jarring error comes in the form of the Ed Sheeran-style ‘Going With You’. Written about Radin’s friendship with his frequent touring partners, Brothers, the top 40 friendly pop beats make it feel out of place and an artificial attempt at a radio-friendly hit.

Although Radin describes himself as “not a very political person”, the final track ‘What Would You Do (Refugee Song)’ takes aim at Donald Trump and his inhumane immigration policies. “What would you do if you saw I was torn / From the love of my mother’s hands? / And what would you do if the clothes I had worn / Were ripped from me where I stand?” Radin asks us from the point of view of a child in need of rescue.

The album closes with the words “What would you do?” repeated several times, a timely reminder for our need to take action in these turbulent times. It’s a pity Radin didn’t harness these feelings of injustice and give us more impactful songs, but while he’s not reinventing the wheel with his other offerings, he does lay himself bare and give us intimate vocals in his signature gently subdued fashion, and those aren’t bad things at all.

Outside of any misfires, earnest vocals lead solid acoustic tracks, although at times things can feel samey