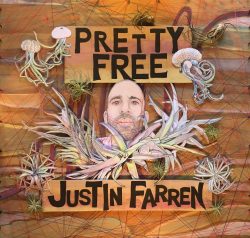 Justin Farren is like an old-fashioned troubadour writing songs and travelling from town to town singing them and playing a battered, old guitar – in Farren’s case the Simon & Patrick model he’s had since he was a kid. On ‘Pretty Free’ only Farren’s fourth album in fifteen years, he’s got a lot to say, so much so that he doesn’t have time for choruses – there’s just a lot of wonderful narrative verses with intelligent and quirky lyrics that mark the songs of an enchanting storyteller.

Farren has a sweet, mellifluous voice that draws you into a song and along with his superb guitar playing, be it finger-picking on an acoustic or rocking along on an electric, it’s not until you listen carefully to the words, that you realise how off-beat and at times subversive, personal and seemingly autobiographical the lyrics are. There’s “We were trying to retrace all the steps that brought us here, Costco returning diapers on a Friday night” (the first line of ‘Always A Little Less’ the album’s opening track), “Looking back we probably should’ve bought some fixer-upper in a better part of town, just a couple of rooms on a postage stamp with some fruit trees on the ground” (from ‘Fixer Upper’) and “I reached down into my faith for some brave hallelujah and found that scared little boy with no breath to call my mama” (from ‘Mama’) amongst many other quotable lines that populate the album.

But the eleven song ‘Pretty Free’ is not just about the lyrics as the melodies are excellent and the production is superb. Recorded in Farren’s shed behind the house in Sacramento CA he built (is there no end to this man’s talents), he plays guitar, piano, organ, bass (electric and acoustic) and percussion with co-producer Brian Chris Rogers providing drums. Farren also co-produced, engineered and mixed the album (is there nothing he can’t do?). Also appearing on the album are a number of other musicians including Anna Tivel who adds excellent violin and harmony vocals on one of the stand-out tracks ‘How’s Your Garden Grow’. Also making guest appearances are Farren’s wife Kerry who provides backing vocals on ‘Fixer Upper’ and there’s a delightful singing cameo at the end of ‘There’s No Such Thing As a Bad Day’ from the Farren’s young daughter Amelia.

Continuing the homegrown feel, the cover art was made by Farren and the whole family were involved in putting together what Farren calls a “Reverse Kickstarter’ package which consists of amongst other things the CD, a hand screen painted t-shirt and a hand-bound ‘Pretty Free’ book both of which were produced by the family on the Farren’s kitchen table!

‘Pretty Free’ is a pure delight from start to finish and sounds like a real labour of love. There isn’t a duff track on the album which ranges in style from folk to talking blues a la Guthrie (Woody and Arlo) to delightful ballads all of which mesh wonderfully together in an album that deserves repeat listening and a big audience.

A truly delightful album that deserves to reach a wide audience