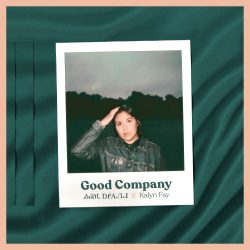 Three years on from her 2016 debut album ‘Bible Belt’, Oklahoma singer-songwriter Kalyn Fay releases her follow up ‘Good Company’. In the ensuing three years Fay has moved to Arkansas to pursue a Fine Arts degree. It’s clear from the songs that she misses her home state, even describing the album as “a love letter to the place I love best”.

The songs are poignant and heartfelt, without sliding into sentimentality. Fay’s Cherokee heritage is alluded to, but the dominant theme is one of home and place, of land and space. In that regard, it will easily resonate with anyone who has ever lived away from ‘home’ and missed it. The sentiment, if not the specifics, are a fairly universal experience.

Producer Jesse Aycock’s credits include being a member of Todd Snider’s Hard Working Americans as well as playing on albums by John Moreland and Elizabeth Cook. Here he conjures up a sound as crisp and clear as a Tulsa sunrise, placing Fay’s vocals to the fore to emphasise the strength of her songwriting. The result is a gentle and laid back feel to the record. This mood is accentuated by Fay’s homely voice. Occasionally, it all feels a bit too gentle and one-paced. Then, another great song comes along to see it through.

The hugely talented John Fullbright, a fellow Oklahoman, is amongst a number of guest players on the record, giving prescience to the impression that with ‘Good Company’, Fay is an artist moving up a notch and deserving of wider recognition.

Oklahoma singer-songwriter moves up a notch with new album