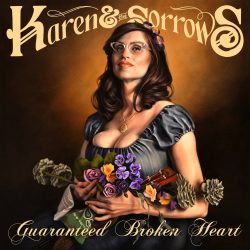 One of the music industry’s most time-honoured clichés is that an artist’s third album represents a critical creative crossroads – even way back in the 1980s,   Essex folk singer Billy Bragg wryly subtitled his immortal ‘Talking to the Taxman about Poetry’ as “the difficult third album.” But in the case of queer country band Karen & The Sorrows third long-player,  ‘Guaranteed Broken Heart’ passes any unwritten musical roadworthiness tests with flying colours.

Unlike The Sorrows’ two previous alt-country-sounding albums, on ‘Guaranteed Broken Heart’ New York’s Karen Pittelman, who leads the band and writes all its songs,  has gone for a more retro, semi-acoustic bluegrass sound. There’s certainly lots of violin and banjo and pedal steel and dobro swooshing around  its twelve tracks, whilst Pittelman’s voice has so much of a vintage, pleasurably ingenuous,  honeyed edge,  that if it were a cake it’d give you a guaranteed sugar-rush, let alone a certifiably damaged ticker as per the album’s title.

Even the album cover has a very old-school look, right down to the semi-sepia backdrop and ornate “Birthstone” typeface (think the wavy kind of writing on the Christmas cards your grandma would send) for the title. But focussing in on its retro style is only scratching the surface of ‘Guaranteed Broken Heart’, given that the lyrics, in particular, are anything but formulaic  – although is that so surprising given Pittelman’s citing Neil Young as a major influence or The Sorrows’ trail-blazing role in queer country?

Right from the opening title track which has the singer refusing to fall for somebody because they know the dire emotional consequences,  the words of ‘Guaranteed Broken Heart’  fall steadily outside the box of conventional clichés

“Don’t touch my face, don’t say my name, don’t smile that smile, don’t get me that way.”

“If you brought me pain then pain was what I needed.
If I can’t be saved then let me be defeated.”

followed straight up a very sensual account of how a sense of self-destruction and desire can fuse on ‘Jonah and the Whale.’ And we’re only as far as track three!

Meanwhile the music shimmers gently (this is mostly a string band backing, after all) but powerfully between a kind of Gothic Country (‘Why Won’t You Come Back to Me?’ and ‘Your New Life Now’) to  a 1970s classic Soul sound – maybe another direction for Pittelman in the future? –  on ‘It Ain’t Me.’ Surely topping the list, though, of  lyrical brilliance are ‘Queen of Denial’, full of dire warnings for  the heartbroken that  no matter how many gloomy George Jones songs they cry along to or how hard they stare at the phone, “you ain’t gonna make it ring” and

‘Something True’, the last track but one, which anchors its soul-searching in the more traditional  country sounds again, with its violin and banjo solo lead-in worth the entry fee alone and a devastatingly simple, but knock-out question:

To end as we began, with a cliché, ‘Guaranteed Broken Heart’ may look and occasionally sound as cute as a slice of the proverbial Mom’s apple pie. But the reality is it leaves a much richer, mind-blowing – and subtle – taste in the mouth, long after the strains of the final track, a warm-hearted slow-dance anthem entitled ‘You’re My Country Music’, have faded away.