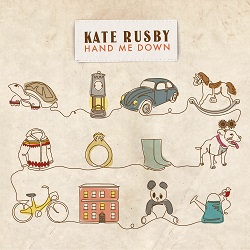 Kate Rusby became known predominantly as one of the “exciting young voices of folk“, some twenty five or so years back and now has a string of well received albums to her name, has duetted with Ronan Keeting on TOTP, sung ‘The Village Green Preservation Society‘ as the theme for the BBC sit-com ‘Jam & Jerusalem‘ and regularly undertakes both regular and Christmas themed tours which have resulted in their own tie-in albums. So, not unnaturally, when the Covid-19 pandemic hit she found herself with a little time on her hands – tour dates were cancelled, and recording with her regular band wasn’t possible.

So, in the spirit of ‘make do and mend‘ Kate Rusby has recorded an album of favourite songs with her husband multi-instrumentalist Damien O’Kane in a home studio, with a little help on back-up vocals provided by their daughters. The idea for a covers album had been floating around for a while – since a guest spot on the Jo Whiley show where artists are asked to do one cover amongst their own tunes – but it has been the enforced hometime that has brought it to fruition.

Each song has a particular meaning to Rusby, as she explains in the accompanying booklet, and generally the associations are with family and friends. For example ‘Maybe Tomorrow‘, the theme to ‘The Littlest Hobo‘ brings forth memories of watching the show as a child, and also of Rusby’s dog Doris. Several of the songs go back to Rusby’s teenage years – so it’s Kirsty MacColl she was thinking of for ‘Days‘ and Paul Young for ‘Love of the Common People‘.  There’s a popping guitar and synthesised drums version of ‘True Colours‘, and a bopping poppy ‘Manic Monday‘. More recent songs include Coldplay’s ‘Everglow‘ and Taylor Swifts ‘Shake It Off‘ which stomps along to a predominantly banjo accompaniment. And if you think it might be odd hearing Kate Rusby singing “‘cos the players gonna play play play play play / the haters gonna hate hate hate hate hate / I’m just gonna shake shake shake shake shake shake it off” then you wouldn’t be wrong.   And the enjoyment – or otherwise – to be found in this album is how much one has been waiting for Kate Rusby singing pop songs backed up by synthesiser keyboards and drum machines. And even more so – these particular pop songs. When the arrangements are more folk grounded – as on the cover of The Cure’s ‘Friday I’m in Love‘ – they better serve Rusby’s vocals, which of course are faultless throughout.

It’s not that covers are a complete novelty for Kate Rusby – the early ‘Kate Rusby & Kathryn Roberts‘ album featured a Suzanne Vega cover – but there’s a difference between one song on an album of traditional – or traditional-sounding – folk songs and a whole album of covers which often eschew that fuller acoustic accompaniment – a fuller acoustic accompaniment that of course was not possible due to the constraints that 2020 has enforced. Which means that ‘Hand Me Down‘, judged against Rusby’s output over the years, is not her best album. It is a stop-gap in lieu of a tour, something to get out to the fans in the middle of a difficult time.  That’s fair enough, and it’ll surely get listened to a couple of times but then also surely struggle longterm to compete with the likes of ‘Hourglass‘ and ‘Awkward Annie‘ in the getting played stakes. Which, sad to say, makes ‘Hand Me Down‘ really one for the true believers and compulsive completists.