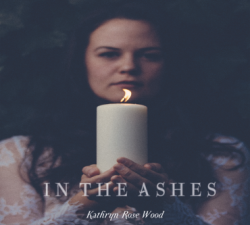 This is a debut album. It is a challenging album and a difficult album, but it is also an absolutely beautiful album. Kathryn Rose Wood, a singer/songwriter based in New Orleans, is also a clinical music therapist with the Louisiana Philharmonic Orchestra and therefore well aware of how powerful music can be in healing and improving well-being. It is poignant then, that the album is comprised of six songs that she wrote while grieving the suicide of her younger brother Preston and which chronicle the stages of grief.

First track Lullaby (To Preston) was featured by American Songwriter Magazine as their “Daily Discovery” and also heavily publicised by the National Alliance on Mental Illness who also featured the single Big Steel Wings as their website’s homepage theme song in May of this year. This is an album that aims to highlight mental health issues, provide support to those who may be considering suicide or trying to come to terms with the loss of a loved one to suicide. A hugely creditable imitative then, and the music is outstanding too.

The two singles, Lullaby (To Preston) and Big Steel Wings are contrasting in styles, the former as touching a tribute as you could hear, the latter faster-paced and inspirational. With lyrics as personal as it possible to conceive, these songs are never going to be an easy listen as Wood has poured her soul and torment into them.

It’s vital for review purposes to state that the music, secondary as it is to the bigger agenda, is sublime with a range of influences from Country and Folk through to hints of Soul. Album closer This Ain’t Fine is as good a testament to the quality of musician that Wood has worked with on the album from Sturgill Simpson and Solange’s touring bands. Add in the capable hands of New Orleans producer Ben Lorio and you have a high quality piece of work.

However, what  is ultimately important is the catharsis that Wood has gone through and is the driving force behind In The Ashes. I would recommend this album very strongly as the songs are worthy of anyone’s time. However, if it does in some way help those experiencing depression, or loved ones who care for them, then In The Ashes has done its job. An excellent album and an essential album.