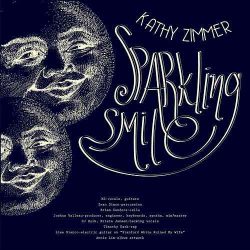 Following the 2018 release of ‘White Noise’, Kathy Zimmer’s new EP, ‘Sparkling Smile’, continues to develop her self-styled cosmopolitan folk sound. Once again, she effectively pulls off the trick of sounding warmly familiar and yet entirely new, blending musical genres and layering instrumentation to create a sumptuous set of songs.

The opening track, ‘Wrinkled Dresses’, begins with the fitting line: “Start out fresh and eager, bright, put together,” and goes on to link the image of a wrinkled dress by the end of the day to a love affair past its best. It’s a bold expression of love fading, just as: “…autumn leaves start to die,” and serves as a gentle start to the EP, with precise finger-picking, layers of strings and Zimmer’s striking singing voice, enriched by echoing backing vocals.

Words and ideas tumble on the Kate Bush-like follow-up, ‘Travis’, and the smartly lyrical single, ‘Time’. ‘Stanford White Ruined My Wife’, based on White’s gruesome murder in 1906, focuses on a darkly fascinating choice of subject matter. White was shot in the face by Harry Thaw, who had harboured years of ill-feeling because White had assaulted Thaw’s wife, Evelyn, when she was 16. Thaw could not escape the mental anguish this caused and announced: “You’ve ruined my wife,” before firing his gun in front of a crowd of high-society onlookers. It makes for an understated, haunting, unnerving song and is a measure of Zimmer’s bravery and quality as a lyricist that she tackles such a real-life tale so well.

Now based in New York, Zimmer’s songs continue to reflect the adjustment to life in the city after her upbringing in Nebraska. This is most obvious on closing track, ‘I <3 NY’, on which she sings of: “Cobwebs on my Midwestern manners…in this carnival of constant abuse.” It’s a poppy, dreamy song about the fight to retain innocence and a sense of self in the chaos of the city. As in ‘Time’, Timothy Dark provides a rap segment, which combines well with Zimmer’s shimmering vocals, helping to lend the track a degree of urbane sophistication, perfectly in keeping with the theme. The beautiful, playful melody engages the listener and is, perhaps, the strongest on the record. So, Zimmer leaves us wanting more and with a subject that lingers. She sings of wanting to retain her sensitivity and keep track of her dreams: on this evidence, that isn’t proving to be a problem for her. Indeed, amidst the hurly-burly of the city, perhaps her dreams just got bigger.

It should be noted that the lovely coloured-vinyl release includes both ‘Sparkling Smile’ and last year’s EP, ‘White Noise’. The records work well together, both sonically and thematically, creating a coherent whole, doubling the enjoyment and providing good value. The staggered EP format releases ensure a condensed, concise approach to song selection: there’s no filler here.

Zimmer’s songs offer unexpected melodies and poetic lyrics, full of effective imagery and precision; each song is a dramatic, cinematic piece of art, delivered with striking, beautiful vocals. Anyone interested in sophisticated song writing, accompanied by catchy melodies and gorgeous singing, will find something to like on ‘Sparkling Smile’. Or as Zimmer herself puts it: “Cosmopolitan folk in your ears.”