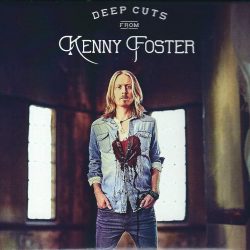 Back in April of this year, Rolling Stone ran their list of the “10 New Country Artists You Need to Know: April 2017” and the first name on that list was Kenny Foster. Listening to his new release “Deep Cuts” it’s easy to hear why. Foster has that journeyman sound and feel to his songs; someone who’s been around the block a few times and sings about life as he experiences it.

“Deep Cuts” isn’t Foster’s first album – that distinction goes to 2008’s “For Now” but he’s gone through quite a transformation in the intervening 9 years. “For Now” was a so-so pop/rock offering that obviously didn’t open too many doors. Re-invented as a world weary country singer/songwriter, Foster has clearly found his true voice and the songs on this album are a fine example of just how well he’s honed his craft since that first recording. He cites some of his influences as James Taylor, Garth Brooks and Counting Crows and you can certainly hear elements of all that in his songs.

The album opens with the first single from the album Stand and it’s a good calling card for Foster and his music. It starts with a slow, stripped down backing and steadily builds to become quite anthemic. If the album has a downside it’s that Foster falls back on this approach for many of the tracks – start slow and pared back and let the song build. He has a great, lived in voice – a good tone and just a bit of rust around the edges and it would be nice to hear him let rip on a more up tempo song – tracks like Revival and the duet Made (sung with co writer Daisy Mallory) hint at a voice that could be a bit of a rocker given the right track. But perhaps that’s not who Kenny Foster is these days and if the songs are all of similar tempo he does do full justice to them and they never get boring.

One thing that’s particularly interesting about the album is that, in common with a lot of Nashville music these days, all but one of the tracks are co-writes, sometimes with up to three writers on the credits. It’s interesting because one of the best songs on the album is closing track Wood & Steel, credited solely to Kenny Foster. He should, perhaps, have a little more faith in his own abilities.

This is a solid album from a talented writer and singer. We’ll be hearing more from Kenny Foster.

Great voice and good songwriting from an artist who oozes authenticity.