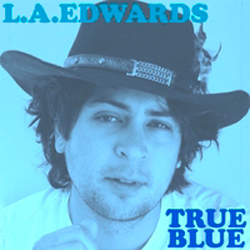 Hailing from South California, L. A. Edwards has hooked up with Heartbreaker Ron Blair in the producer’s chair for this collection of what is probably best described as “soft rock,” that genre which ruled FM radio in the early seventies. In a serendipitous manner it landed on this reviewer’s desktop just as we entered what we must now admit is a bit of a heatwave and although we haven’t yet stooped to drinking Magaritas it has to be said that the album has been a pleasant balm wafting across the garden as cold lager is quaffed.

Despite Blair’s presence Edwards doesn’t try to ape tom Petty, instead there’s the classic LA breezy  sounds of Asylum artists of the time with a definite whiff of Jackson Browne in places and it’s in these places that Edwards comes off best. At times he can tread a little too softly with a song such as ‘From Here to Eternity’ waltzing just a little too closely to yacht rock while ‘Lovin’ You’, despite a fine arrangement, is a little too smoochy. However he redeems himself on ‘Everywhere’ which has a classic LA touch to it with some fine piano playing and harmonies while ‘Oh No’  has a fine guitar solo in it just where Waddy Watchel would have put it. And while Edwards is not in the same league as Jackson Browne, ‘Leaving Los Angeles’ and ‘Part of Me’ could have been  outtakes from For Everyman, the latter bowing out with a very fine slide guitar just where David Lindley would have put it.

Overall a very pleasant debut which hints at better things to come.