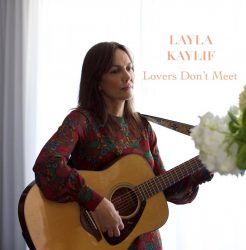 Layla Kaylif is a new kid on the block, in the Americana realm at least. With releases dating back to 1999’s ‘Shakespeare in Love‘, a pop success in the Middle East  and South East Asia, the British Emirati’s career has ranged from songwriter and recording artist to film scriptwriter and director for the 2018 movie release ‘The Letter Writer‘, in which she also had a leading role.

Interviewed during the making of the film she was asked about her continuing musical ambitions: “I want to do a folk/country record with Sufi-esque themes. So imagine Rumi lyrics in a country song. Does that sound appealing? I haven’t quite reached a point where I can say that I’ve fulfilled my musical vision. That still hasn’t happened. Maybe it won’t happen, I don’t know. But it’s still the main driver and not something I’m going to give up easily.”

The album which has emerged from this vision is ‘Lovers Don’t Meet’, a short seven-track record. Recorded in Nashville, and produced by Jason Hall (David Nail and the Well Ravens; Little Big Town) it features an experienced line up of Reed Pittman and Matt Iceman (David Nail), Cornelius Perry (Francesca Battistellli) and Ben Owens on guitar.

The concept of songs as ‘three minute movies’ is an oft-held Nashville tenet, and in the same interview Khalif said “It’s like Joni Mitchell said, that when you’re a singer/songwriter you’re the director, you’re the writer and you’re the actor. Because it’s yourself.” Short and sweet, and with catchy choruses, her songs draw the listener in, with effective use of visual imagery, as in ‘Don’t You Know Me Yet’, where she sings “You’re looking in your crystal ball/wondering where it all went wrong/you’re laying out your tarot cards/and staring at the woman with the two of swords”.

Short but sweet, with folky leanings