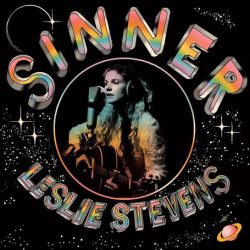 Jonathan Wilson is a hugely talented producer, as well as a solo artist in his own right, and when he produces an album the great and the good sit up and take notice (Dawes, Father John Misty, Roy Harper, Treetop Flyers et al). And this album by Leslie Stevens is no different. Possessed with a traditional, honeyed and heart-stopping voice (that could sing the phone book and make grown men and women cry) on ‘Sinner‘ Stevens also reveals a strong lyricism and an ear for a catchy tune.

Album opener ‘Storybook’ gently takes us into her world. Soft acoustic rhythms with an undertone of keyboard tension and that voice – part Parton and part Dixie Chicks – draws you in as the Hammond swells. ‘Twelve Feet High’ is a sparkly blues exercise with Stevens dancing over the beat – sassy and earthy and the chorus is a killer. This is bright and uplifting with nods to late-era Beatles in the production as it cocoons the track with some spectacular fills and frills. The title track is a slow-burning groove almost eighties-style in its intro all soft synths and liquid lead guitar and Stevens’s voice is at its most languid and arresting with silky harmonies burnishing the acoustic guitars as they come in. In perhaps a nod to influences there is even a track called ‘The Tillman Song’ featuring some glorious Wilson guitar licks as it hustles through until the majestic Floydlike coda. Cracking stuff.

The album finishes on the high plateau with ‘The Long Goodbye’ a slow, epic, waltz-time beauty that builds and builds and then finishes with just that voice and the instruments fading around it. This is lovely stuff and a cut above the norm. Purchase without fear and enjoy.