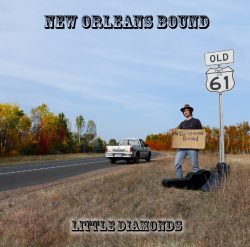 Essentially a John Prine/Early Dylan channeller, New Orleans Bound offers up 45 minutes of undiluted classic guitar, singer and occasional colour of harmonica, drum, bass or string. As an exercise in nailing a sound – lonesome travelling troubadour it ain’t half bad. Lots of walking blues half sung half spoken in a surprisingly weathered and clear voice given the youthfulness of the face on the CD cover.

However, this reviewer took against this album on principle with its inside CD jewel case photo shot of the erstwhile ‘Little’ being attended by a couple of bikini clad ladies and his hand draped casually on one of their hotpants. Really!?  I know the music is certainly a refraction of early 60s folk but to the bring prevalent attitudes from then as well is a commercial misstep for an artist who, I am sure, craves credibility for his work.

It is a testament to the strength of the set in these grooves that this review is a positive one, as each song is carefully crafted and beautifully reproduced with an arresting clarity of tone and musicality. These are complex songs that sound simple – a real songwriting skill that bodes very well for the future. It would be great to see the palette extended to give the songs more heft and with that I would suggest that Little Diamonds has a very strong future. Here’s hoping he gets better advice in the future in terms of publicity shots!

Early John Prine is the template and it works