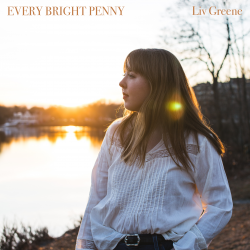 Boston, Massachusetts is the current home of singer-songwriter, Liv Greene, where she is an active member of the city’s musical community. Greene has performed regularly at Club Passim, a non-profit folk venue and school of music where she has honed an individual edge to her Appalachian inspired folk and roots music.

Produced by Isa Burke, herself a fiddle player, singer and guitarist, ‘Every Bright Penny’ draws on Greene’s personal experiences over the past four years, ranging from the excitement and fear inherent in the early stages of a relationship to the pain of moving on.

In ‘New York’s Arms’, Greene sings of change and new opportunities resulting from the end of a relationship; its traditional banjo and acoustic guitar backing brought up to date with electric guitar. Some of these opportunities will lead to further change as Greene looks at the, “East River shining like the promise of a new love, I will probably miss on down the line”. ‘Wishing Well’ contains sentiments of regret, longing and empathetic instrumentation that make this a delicious track to savour. ‘Independence’ has a bluesy rhythmic feel, bringing to the fore Greene’s chrystalline vocals.

Grace Ward on upright bass, adds to the charm of ‘Wayside’ which has a magical, lazy, lilting warmth that envelops the listener. ‘Gone’ introduces a welcome punchiness in the lines, “I don’t mind you cheating, as long as you don’t mind me gone” and features some fine fiddle work from the album’s producer Isa Burke. ‘Take Me to the Station’, with its catchy chord progressions, comes straight from the heart, providing a platform for the subtleties of Greene’s vocal talent. Greene claims Joni Mitchell as one of her many influences and it’s hard not to see this in the final track, ‘The Best Way Out’ which is a beautiful and atmospheric lament.

Take this album with you to a quiet place; it needs to be an immersive experience; you will be cleansed and have a little more faith in the world.