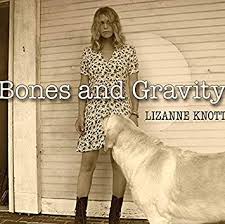 Lizanne Knott is one of those wonderfully expressive singer-songwriters that sound as though, if they had gone down a different route, might have been swallowed up by mainstream Nashville’s blandness. Instead she, along with so many of her peers who are reviewed on this website, has developed a style of alt country-based Americana that is manna to the ears.

Priding herself on her lyrical prowess, Knott writes songs that are deeply personal and delivers them with an intimacy that opens those inner feelings to the scrutiny of a wider audience. In her own words “When life gets too hard to cope, I write.”

Examples of this personal introspection are littered liberally throughout this album. The title track ‘Bones and Gravity’ is about dealing with love and loss and how life can turn in the blink of an eye. It is probably the highlight of the album with the cello of Michael Ronstadt, nephew of Linda, and the background vocals of Ciara Grace and Antje Duvekot working in perfect harmony with a mournful guitar. It is a masterful piece of songwriting delivered with feeling by Knott’s smoky gravel tinged vocal.

‘Bones and Gravity’ was recorded in Knott’s native Pennsylvania but that almost inevitable draw to Nashville is exposed in the wonderful ‘Emmylou’. At a time when she was being torn between her family and friends at home and the desire to pursue a career through her residence in Nashville, Knott uses her long time draw to Emmylou’s music as inspiration for an achingly heartfelt song.

Knott’s vocals are perfectly suited to these kinds of stripped back, revealing songs and tracks such as ‘Tired’, a reflection on the point of a relationship where the feeling of monotony and resignation takes over are performed with an almost painful realism. There is an overall mood of contemplative reflection to the album and her accompanying musicians never threaten to relegate the vocals to the background, instead acting as perfectly balanced side dish to Knott’s main course.

‘Lay Him Down’ and ‘Hurricane’ are rare forays into more up-tempo territory and, while it is these tracks that veer closer to a country sound, they remain solidly rooted in high quality Americana. In short, Lizanne Knott continues to forge a path of her own, in the true spirit of Americana. ‘Bones and Gravity’ is a lovely piece of work, an album that showcases Knott’s talents as a writer and her ability to interpret them in song in equal measures.

A classy piece of intimate and personal songwriting