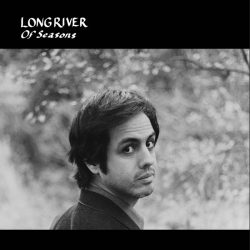 Moving on from the electric guitars and R&B swagger of his time with The Black, David Longoria’s project, Longriver, and his debut album ‘Of Seasons’ is a folk album showcasing Longoria’s excellence as a guitarist and singer-songwriter. Yet the album is missing something, calling out for an upbeat song or two, with them all sounding very similar, other than the final song, ‘Kuku Ree’.

The whole album is led by Longoria’s excellent guitar-picking skills, showcased right from the start in ‘When The Ark Was Building Noah’. The song starts us off on the journey of the album and we hear the tales of Longoria begin when he says “when the ark was building Noah, and I was sitting nowhere”. These sorts of lines appear throughout and his focus on companionship is evident in the first song and for the duration of the album.

‘Of Seasons’ is led by Longriver’s lyrical, Fahey-styled guitar picking, accompanied by upright bass and ambient organ, piano, and cello. The guitar playing is what makes this album feel like you are part of one long story, with the slow speed of every song creating a melodic tone enabling the songs to almost flow into one another, and yet this also makes each song struggle to be distinctive or memorable.

The first single of the album, ‘Wasting Time’ is memorable, however, and is sung with great force, encouraging us to think about our own insecurities and how we too waste time. The never-ending repeated phrase of “wasting time” in every chorus presses hard every time Longoria feels like he is wasting time and perhaps focuses us on where we can enjoy this procrastination in our lives: “Wherever I step I’m wasting time, I bite the lip of wasting time, I even take a sip of wasting time.”

Not all albums need that upbeat song, as the acoustic tracks usually have enough difference between them, however, you feel like this album needs exactly that. Longoria’s voice is calling for the return of his electric guitars and the more upbeat sound.

Overall, the album follows a very similar sound throughout whilst teaching us about a wide range of themes, looking in particular at companionship, and how our society struggles to deal with pain. It’s an album that will delight Longoria’s following and those who followed The Black, but might simply become another run of the mill album to be overlooked by prospective new fans.

A relaxing album that is missing that key something