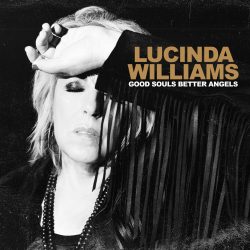 The broad-church of Americana sometimes divides us. But one thing that most fans would agree on is that artists like Lucinda Williams personify the spirit and sound of the genre. Williams is the sort of musician who generates excitement when a new release is imminent. Such expectations could be stifling and restrictive; they could serve to limit creativity and experimentation. However, in Williams’ case, the opposite is true – it seems to inspire the famous perfectionist to produce some of her best work.

It is to Williams’ great credit that she can turn out an album as direct, as powerful and as consistently exceptional as ‘Good Souls Better Angels’ after forty years in the music business. Hers is a career that has taken in three Grammy awards from fifteen nominations and led to her being named America’s Best Songwriter by Time Magazine in 2002. Revered by her peers, her songs have been covered by the likes of Mary Chapin Carpenter, Emmylou Harris and Tom Petty and her list of great collaborators is endless.

The new album is co-produced by Williams, Tom Overby and Ray Kennedy, who worked on the commercial and critical hit, ‘Car Wheels on a Gravel Road’. For the first time, Overby, Williams’ husband, gets co-writing credits on a number of songs. Williams is also accompanied by her brilliant band, who were able to record the album live, reinforcing the sense of purpose and power, like the world’s most accomplished garage band. Buoyed by the strength of the team around her, Williams has moved away from the intimate, personal narratives she is known for. She has looked up and surveyed the social and political world around her. And, boy, she does not like what she sees. The result is direct, edgy, angry. Ultimately, though, the album is bursting with a determined hopefulness because, in this mood, there is no way Williams will let the swirling forces of negativity around her win.

The album opens with ‘You Can’t rule Me’, on which the first line is: “Man I got to write, / To talk about what I see. / Way too much is going wrong / Right in front of me.” It’s a statement of intent. The vocal is rough and rebellious, driven on by distorted guitar, a wailing solo and a powerful rhythm. The tone is set. There is a controlled intensity and, across the album, that feeling never really lets up. Next up is ‘Bad News Blues’. Again, an excellent guitar solo grows organically out of the strong bassline and melody. Indeed, the guitar of Stuart Mathis is a consistently fine feature of the whole album with all the songs benefiting from his atmospheric, winding work. On this, Williams asks: “Who’s going to believe liars and lunatics? / Fools and thieves and clowns and hypocrites / Gluttony and greed and that ain’t the worst of it.” She asks and answers her own question and summarises the theme of the album.

It also leads nicely onto the album’s highlight: the first single, ‘Man Without a Soul’. Slower but even more angrily defiant, this song is very explicitly about one particular President. You can work it out. “You’re a man without truth / A man of greed, a man of hate…You’re a man without a soul, / All the money in the world won’t fill that hole,” is a brutally hard message, reinforced by excellent percussion and a brooding, building, distorted solo that is almost like an extra protesting voice. The certainty behind Williams’ repeated chant, “It’s coming down,” is fearsome. The contrast with ‘Big Black Train’, which is about the dark cloud of depression, is stark. Something William’s does extremely well is to actually feel even more noisily passionate when the songs quieten down. The moments of relative calm are particularly effective. The character and grit in the vocal performance adds to the emotive atmosphere of one of the album’s most absorbing songs. Williams is one of those singers, like Tom Waits, whose voice has become ever more distinctive and engaging over time.

The remaining songs sustain the quality. From the scratchy, industrial guitar of ‘Wakin’ Up’, about domestic abuse, through the biblical references in ‘Pray the Devil Back to Hell’ to the more delicately melodic ‘Shadow and Doubts’ and heavy, rolling drums of ‘Down Past the Bottom’, the music is constantly absorbing. The songs hang together sonically, stylistically and in mood and tone. Despite the intensity though, there is a sense of resilience and hopefulness in ‘When the Way Gets Dark’ and the gently epic closer, ‘Good Souls’. When Williams sings, “Don’t give up, it’s going to be alright,” or, “Keep me with the good souls,” these are simple, open, heartfelt pleas and we are on her side. It’s measured and disarming.

The album, as a coherent whole, is an example of song-writing and musicianship of the highest standard. Album of the year stuff. It is idealism with a venomous edge. Sometimes, the elements are simple but outstanding songcraft and a sense of purpose transform the album into a powerful political statement, at once intimate and broad in scope. Perfectionism pays off.

With a performance of controlled intensity, Lucinda Williams take on the world… and wins