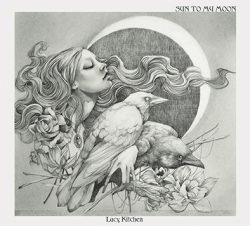 Lucy Kitchen’s songs are intimate in that they are often love songs, and the performances and backing are closely arranged around her voice, which is a thing of some beauty. It is the voice that dominates; the songs of loss like Searching for Land or He is Lost to Me suit her perfectly. In atmosphere the songs have something of Nick Drake about them. Hollow has that peculiarly bucolic jazzy feel; it’s folk music but it’s reaching out to other forms. Those other forms include the usual bedfellows like country – the billowing of pedal steel on Lovers In Blue doesn’t overwhelm, it just does its job of counterpointing the harmonies. It’s interesting that when the strings arrive they are formal violins rather than the fiddles you might expect, so the pedal steel, when it returns, seems quite maverick.

Kitchen doesn’t need much accompaniment, the pared back Little Love where it’s just her and the acoustic guitar sounds near as full as the full band songs – indeed the impact of this song is enhanced by the simplicity and the vocal performance which is really outstanding, it’s the kind of thing that can break a heart. I prefer the intimacy of the performance to the more expansive Charis which mixes the pedestrian skitter of brushed drums with the fat drops of electric piano to create something that pulls the ear away from the voice, and it’s the voice that should be listened to.

There’s something cooking with Kitchen