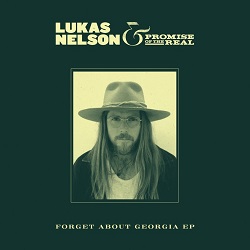 Lukas Nelson & Promise of the Real (bassist Corey McCormick, drummer Anthony LoGerfo and percussionist Tato Melgar) have had a busy schedule being Neil Young’s band, touring their own album, and working through a summer of high profile festival appearances including getting ready for Lukas’ dad’s Farm Aid later this month. Not to mention the band’s motion picture debut in the remake of ‘A Star Is Born‘ for which Lukas co-wrote many of the film’s songs with Bradley Cooper and Lady Gaga. So, with all this going on it’s remarkable that Lukas Nelson & Promise of the Real have managed to actually release some more music.

The ‘Forget About Georgia EP‘ is a five track stop-gap, with a surprisingly wide spread of musical styles which demonstrate why Lukas and the band are in such high demand. It has both the full length and radio edit versions of the title track – although once one has heard the full version the radio edit is unlikely to get much listening since it omits the excellent extended guitar solo coda. Without that additional joy it’s a nice enough broken-heart ballad, which includes nods to both the Willie Nelson and Ray Charles recordings of ‘Georgia on my mind‘. The full version swings skywards with a spacey guitar solo which perfectly compliments what went before whilst taking the song off into a whole different musical realm.

‘Giving you away‘ is a slow and soulful country ballad – which could be read a couple of ways – either as a graceful ending to a long-term relationship, with the lady finding new love but everyone staying amicable and grownup about it. Or, possibly, it’s a subtle attempt to corner the father and daughter wedding dance market  with lines like “you’ve grown so much and it feels like a crime / that I don’t get to keep you here until the end of time /../ I’m giving you away / but I’m never going to let you go“.  Either way it’s a pretty fine song. The cover of Bowie’s ‘Life on Mars‘ is a pretty straight reading of the song which shows off the bands eclectic tastes – certainly not just another country band. And the EP is completed by ‘Start To Go‘ which sees Lukas Nelson & Promise of the Real channelling a strong Manassas vibe, with excellent Stills-esque flashes of guitar coupled with a much more twangy bridge. Neat.

Lukas Nelson is that rare example of the child of a hugely successful  musical parent who has carved out a credible niche for themselves and this EP really explains why – he can walk close to Willie’s country territory with no embarrassment, and he can rock out too.

A couple of new tracks, a fan favourite and a Bowie cover. That’ll have to do…for now.