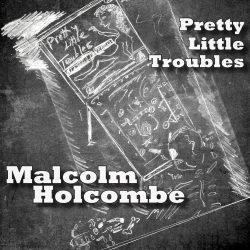 For those not familiar with Malcolm Holcombe, he is somewhat of an institution. There aren’t many artists that can say they’ve had a career quite like him and after 20 years and 15 studio recordings, he’s still going as strong as ever and continuing to expand on the vast body of work he has built. The production on the record is crisp and clean and allows room for the impressive guitar skills of Holcombe to shine through along with some subtle and perfectly placed harmonica to compliment the gravelly, whiskey-drenched and rough-around-the-edges vocals we’ve come to expect from him.

That being said, at times and even with the quality of the production on the record, it is difficult to understand the lyrics and can make the songs a tough listen, however, these moments are few and far between and display a level of authenticity often brushed over or touched up on modern recordings if nothing else.

The record kicks off with a classic blues number Crippled Point O’ View and for the next few tracks, we are treated to a brief showcase of sorts, demonstrating the variety of styles which he is able to lend his talents to and the versatility he has to offer. From the tender ballad Yours No More, through the foot-stomping, bluegrass number Good Ole Days and finishing up with the infectious Outta Luck, the variety on offer throughout this record is impressive to say the least and really cements Holcombe as more than just a country-blues singer as opposed to a multi-faceted artist who has honed his craft over the course of many years in the game. However, these aren’t the only highlights of the record and the diversity never slows up, as further down the line there is album namesake and brilliant walking-blues number Pretty Little Troubles and a tale of a trip to a quaint UK town in Bury, England featuring some brilliant anecdotes about “the worst cup o’ coffee” he ever had to drink, amongst other things. Holcombe is at his best on tracks like these when he is playing his own brand of the blues and finding humour in the more troubling times whilst delivering them in such a colloquial manner that you almost feel like you’re right there with him trading stories.

Overall, ‘Pretty Little Troubles’ is a solid record and a great addition to an ever-growing discography from a man that never seems short of an interesting story to tell and I’m sure it won’t be long before we hear from him again.