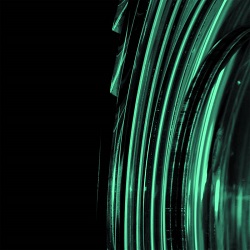 In this case weirdness would seem to be a sardonic view of the world, somewhat akin to the albums of Father John Misty – and, like Josh Tillman, Northern Irish singer Stephen Scullion has adopted an anonymous moniker – Malojian – to perform under. Unlike Josh Tillman, Malojian’s music sits in a softly rocking folk sphere – with the occasional interjection of found sounds or apposite recordings -the latter used to some perfection on the opener ‘Some New Bones‘.

It’s a song about ageing gently, full of echoey guitar, subtle strings and percussion as Scullion sings the simple truths like “Don’t let you bones wear out – you’re going to need them“, whilst a radio presenting style voice intones “the waves are a part of creation” and “all of it ageless, time, today, tomorrow, yesterday, what does it matter?” It’s simple and hypnotic and it hints at great meanings without ever revealing them. This same seriousness is reflected in ‘A New Armageddon‘, which floats on jazz drumming and guitar wailing out – and wailing in – as the avoiding the end of a beautiful blue world opportunities offered by ‘a bunker up the road‘ are considered.

Not that Malojian is all about dark and depressing topics – remember that appellation of being sardonic? ‘Beard Song‘, over a gentle piano part, mercilessly mocks a newly hirsute hipster “just because you grew a beard it doesn’t make you cool / anyone can do it / there’s really nothing to it / you fool” before offering support to natural hair, embracing baldness Scullion adds, “let it blow away / let all of your hair blow away“. There’s a soft jazz feel again as a trumpet breezes in. Although, actually there isn’t – there’s a full rock-band beating groove to it, thumps emphasizing the points. Although there isn’t – actually there’s a nice piano and cello accompaniment drifting lazily on female backing vocals. In fact there are three versions of the song dotted across this album. This is, after all, the deluxe release – so nearly every song appears twice with a demo or an acoustic or a live version added. And the alternate versions are interesting, to see the reshaping of a song without the full band support or in a more acoustic setting – ‘Ambulance Song‘ becomes a gentler folk song where the band version staggers along at a military pace – with drum riffs that are reminiscent of Jefferson Airplane – which adds an uneasy spaciness to what seems to be a song about an overdose “I found you lying on that bathroom floor / … / I called the doctor, said he’d come quick / you got to help me, boy, my girl’s sick.”

‘Let Your Weirdness Carry You Home‘ is an album that sticks quick, with melodies and snatches of lyrics that quickly worm their way into the mind. There’s folk in here, and also shades of jazz and rock, with a barely perceptible haze of psychedelia floating over it. It really isn’t truly weird – but it is strange in places, and all the better for it.

Malojian mixes shades of dark and light and create a shining folky-rocky album. Groove on!